Baobhan Sith, also known as Baobhan Sidhe, Bavanshee, Baavan Shee or The White Woman of the Scottish Highlands, is a fairy Vampire who appears to men taking a the form of a beautiful woman in order to seduce them and drink their blood. 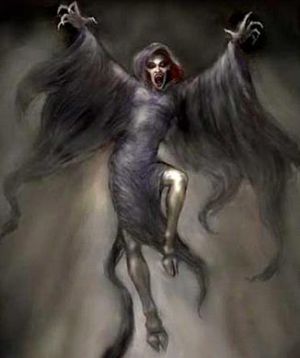 The baobhan sith sometimes appeared as birds of carrion, such as crows or ravens. Other times they took the form of beautiful lasses with long green dresses which hid their deer's hooves.

Baobhan Sith are very dangerous and evil and they act preying on human being, mostly hunters but unwary travellers passing by the Highlands as well. According to legend, Baobhan Sith are mostly attracted to hunters (as their clothes might smell of blood) and to young men out after dark.

The Baobhan Sith approach their victims by inviting them to dance with them, until they are exhausted because while dancing the sidhe, feed upon them, sucking their blood until death.

Baobhan Sith are fairy creatures so they might be harmed and killed by iron. But their awesome beauty is hard to resist even for those who understand how dangerous they are. Also, if horse-riding hunters are surrounded by baobhan sith they can usually ward them off by staying on the horse, if they manage to resist the creatures’ beauty.

Four men were hunting in the wilds of Ross-shire-, and took refuge for the night in a deserted shieling. To keep themselves warm they began to dannce. Three of them danced, and one supplied the mouth music. As they danced one of them wished that their sweethearts were with them. At oncne four beautiful girls came into the building, in green clothes, with long goldenn hair. Three of them danced, and one sat by the singer. Presently the singer noticed drops of blood fallinng from his friends. He started up, and his partnenr flew at him. He escaped from her, and took refuge among the horses, where he was safe until daybreak. In the moring he went back to the shieling, and found the bloodless bodies of his companions, sucked to death by the dreadful baobhan sith.