In demonology, Barbatos is an Earl and Duke of Hell. 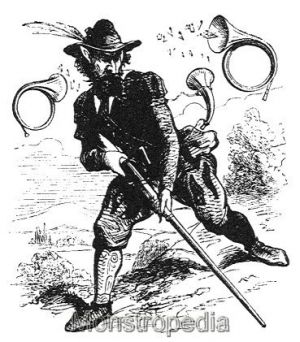 Once of the order of the virtues of heaven, he is now an Earl and Duke of Hell who commands 30 legions.

Barbatos appears as a horned archer or hunter in the woods with four kings sounding horns before him. He is similar to Robin of the Woods or Jack in the Green.

Barbatos teaches how to decipher what animals speak of, knows of buried treasures, can reconcile disagreements between friends, and knows of past and future events.

Barbatos, a great countie or earle, and also a duke, he appeareth in Signo sagittarii sylvestris, with foure kings, which bring companies and great troopes. He understandeth the singing of birds, the barking of dogs, the lowings of bullocks, and the voice of all living creatures. He detecteth treasures hidden by magicians and inchanters, and is of the order of vertues, which in part beare rule: he knoweth all things past, and to come, and reconcileth freends and powers; and governeth thirtie legions of divels by his authoritie. Pseudomonarchia daemonum - Johann Wier (1583)

The Eighth Spirit is Barbatos. He is a Great Duke, and appeareth when the Sun is in Sagittary, with four noble Kings and their companies of great troops. He giveth understanding of the singing of Birds, and of the Voices of other creatures, such as the barking of Dogs. He breaketh the Hidden Treasures open that have been laid by the Enchantments of Magicians. He is of the Order of Virtues, of which some part he retaineth still; and he knoweth all things Past, and to come, and conciliateth Friends and those that be in Power. He ruleth over 30 Legions of Spirits. His Seal of Obedience is this, the which wear before thee as aforesaid. Goetia - S. L. MacGregor Mathers (1904)