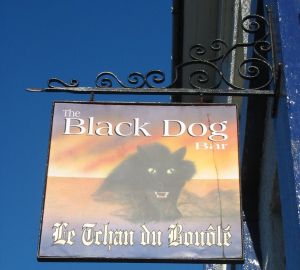 Barghest, Bargtjest or Bargest is the name given in the north of England, especially in Yorkshire, to a mythical monstrous goblin-dog with huge teeth and claws.

The derivation of the word barghest is disputed. Ghost in the north of England was once pronounced guest, and the name is thought to be burh-ghest, town-ghost. Others explain it as German Berg-geist, mountain demon, or Bar-geist, bear-demon, in allusion to its alleged appearance at times as a bear. The barghest has a kinsman in the Rongeur d'Os of Norman folklore.

The barghest is essentially a nocturnal spectre, and its appearance is regarded as a portent of death. Its Welsh form is confined to the sea-coast parishes, and on the Norfolk coast the creature is supposed to be amphibious, *coming out of the sea by night and travelling about the lonely lanes.

The spectre-hound under various names is familiar in folk-lore:

"For he was speechless, ghastly, wan
Like him of whom the Story ran
Who spoke the spectre hound in Man."

The barghest in literature

The barghest in film