Barnacle geese are legendary birds that allegedly came from trees that grow over water. these trees produce birds that look like small geese; the young birds hang from their beaks from the trees. when the birds are mature enough, they fall from the trees; any that fall into the water float and are safe, but those that fall on land die. 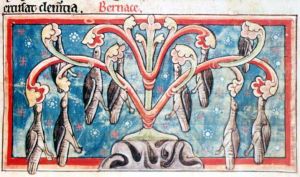 Some people thought that these geese hatched from barnacles, and were thus able to eat them on friday, since they were considered to be fish, not meat.

" They are like marsh-geese, but smaller. they are produced from fir timber tossed about at sea, and are at first like geese upon it. afterwards they hang down by their beaks... in the course of time.. they either fall into the water, or seek their liberty in the air by flight... i have seen with my own eyes more than a thousand minute bodies of these birds hanging from one piece of timber on the shore, enclosed in shells and already formed...hence the bishops and clergy in some parts of ireland are in the habit of partaking of these birds, on fast days, without scruple".

"We find trees in scotland which produce a fruit enveloped in leaves, and when it drops into the water at a suitable time, it takes life and is turned into a live bird, which they call the tree bird."

The barnacle goose (branta leucopsis) is a type of black goose also called the brent goose. of course, they do not grow from trees.