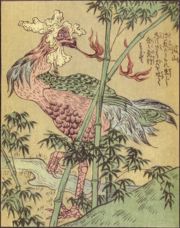 The basan as depicted in Takehara Shunsen's Ehon Hyaku Monogatari.

Basan is a fowl-like bird with supernatural powers that used to live in the mountains of Iyo Province (today Ehime Prefecture).

According to the description on the illustration in the Ehon Hyaku Monogatar, Basan resembles a large chicken and breathes ghost-fire from its mouth.

During the day Basan hides itself away in bamboo groves, but at night it emerges and wanders into villages, making a strange rustling "basabasa" noise and causing people to peek out of their houses, only to find nothing there. The basan is also said to breathe fox-fire, creating eerie ghost-flames. It is, however, not known to cause any injury to humans.