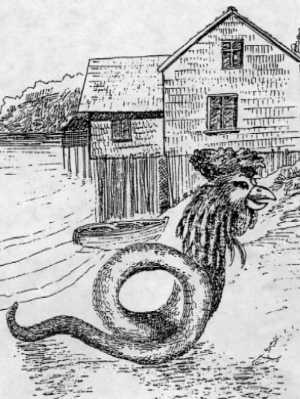 The Basilisco chilote is a creature from Chilota mythology, in southern Chile.

The Basislico chilote has the crest of a rooster and a serpent's body. It is hatched from a rooster's egg.

The Basislico chilote lives in hidden cavity which it digs under a house. It feeds on the phlegm and saliva of the people who live in the house, causing the inhabitants to dehydrate and eventually die.

To kill the Basislico chilote, it is necessary to burn the egg as soon as it is laid and kill the rooster which laid it to prevent further eggs from being laid. Once hatched, the only way to destroy it is by burning down the house where it lives and preventing him from escaping.

This myth is based upon myths of the Colo Colo and the basilisk, but borrows more from the tradition of the cockatrix which itself draws from the basilisk.