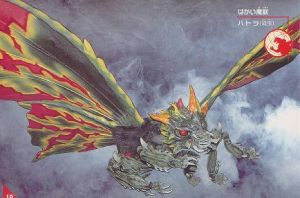 Battra (バトラ, Batora) or Black Mothra is a giant black moth kaiju that first appeared in the Heisei Godzilla film Godzilla and Mothra: The Battle for Earth.

Battra's name most likely comes from the common Japanese practice of shortening two words to make one; in this case the combination of the Japanese spelling of Battle Mothra (Batoru Mosura).

Like Mothra, Battra has both larval and adult forms but did not require a chrysalis in order to metamorphose into his adult form.

In its larval form, Battra can wield a massive yellow horn which could be put to use as a battering ram or bludgeoning weapon. From the horn, he was also capable of firing off furious electrical blasts of an orange-yellow color. He could fire similar electrical blasts of a purple color from his crimson eyes. However, these beams would often fly wildly about, Battra not having precise control over them yet. 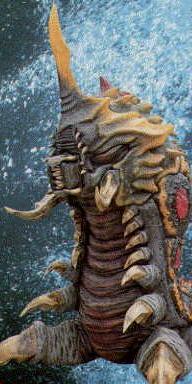 In its imago form, Battra had lost the ability to burrow or swim, but attained flight with its new wings, allowing for easier and more efficient travel for further destruction. The once prominent horn had disappeared and had been replaced with three smaller horns. These horns were incapable of releasing energy anymore, but Battra had developed more powerful optic beams, known as prism beams. Unlike the beams used in his larval form, adult Battra had complete control over the beams. He also developed three pairs of legs and would utilize them for grasping objects.

Battra was created by Earth's life force to defend the planet from various threats, such as meteorites and human destruction of the environment. Over 12,000 years ago there was an advanced human civilization which originally lived in harmony with the Earth, but when they created a device to control the climate, this offended the living Earth, which sent Battra to destroy the device. Unfortunately, Battra, as the physical embodiment of the Earth's anger, continued its rage well beyond its task, and began to harm the very Earth itself. Mothra was sent to stop Battra's rampage and restore the natural order. In the fierce battle between Mothra and Battra, the existing human civilization was destroyed in a tremendous flood.

After the battle, Battra rested in the Arctic Ocean, whereas Mothra retired to Infant Island in the Philippines, accompanied by the two Cosmos. It was intended that Battra would reawaken in 1999 to prevent a large meteorite from destroying the Earth. Instead he awoke when a smaller meteorite hit the Earth in 1992, seven years too early.

With no assigned task, the Cosmos expressed concern for what Battra might do. As predicted, Battra once again vented his wrath on human civilization. The larval Battra was drawn to the newly hatched incarnation of Mothra, but was distracted by the presence of Godzilla, who had also been awakened by the meteorite. Godzilla, as the epitome of ecological imbalance and human violation of the Earth, became Battra's target instead of Mothra, who escaped while the two fought. Godzilla and Battra battled on the ocean floor, until they caused a rift to open between tectonic plates. Both monsters were swallowed up into the Earth's crust. 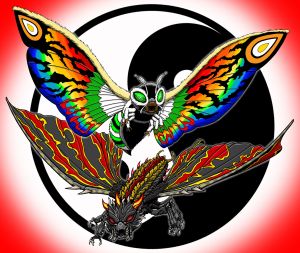 Battra emerged from the sea later, apparently unharmed by the searing lava, and set off after Mothra and Godzilla. After a fierce aerial battle with Mothra, in which Mothra was injured, Battra attacked Godzilla. Godzilla severely wounded Battra, and was about to finish him off, but Mothra suddenly intervened to save Battra. Mothra then gave Battra an influx of light and sparkling energy, and the Cosmos were delighted that their two charges had become friends.

Godzilla then attacked again, wounding Mothra. As the mutant dinosaur was about to strike the killing blow, Battra intervened this time, saving Mothra's life. The two insects then had a conversation, much to the amazement of the observing humans. During this communication, Mothra made a promise to Battra. The two then worked as a team to get rid of Godzilla, and together carried him back out to sea. Unfortunately, Godzilla had mortally wounded Battra, and he died. Godzilla showed the power of his double rows of teeth, being able to easily crunch through Battra's tough armor.

The promise Mothra made to Battra was to take on Battra's task of preventing the destruction of the Earth, should Battra not survive. At the end of the film, Mothra leaves Earth to fulfill this promise.