In Norse mythology, Baugi is a giant, the son of Gilling and the brother of Suttung. They guarded the mead of poetry that was made from the blood of Kvasir in the cauldron Odraerirr. 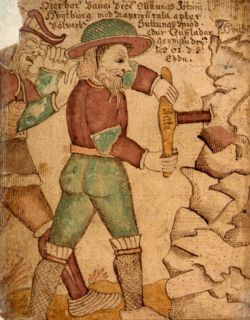 Baugi drills into the mountain so Odin can get inside. Illustration from an 18th century Icelandic manuscript.

The two dwarves, Fjalar and Galar, that have created mead of poetry from Kvasir's blood were also responsible for the murder of Gillingr and his wife. His son, the giant Suttung, enraged, took the dwarves out to sea, setting them on a reef which would be covered at high tide. The dwarves entreated Suttungr to spare them, offering him for reconciliation the precious mead they had obtained. Suttungr brought the mead to his home and concealed it in a place called Hnitbjorg, asking his daughter Gunnlod to guard it.

Odin left his home and traveled to a certain place where nine thralls were working mowing hay. He asked if any of them wished him to sharpen their scythes, and all agreed. Odin then took a whetstone from his belt, sharpening their scythes greatly. So impressed were they by how well their scythes now cut the harvest, they asked insistently that he sell the stone to them. Odin told them he would only sell it at a very considerable price, but they agreed and persisted. He then tossed the whetstone into the air, and the thralls scrambled for it with such desire that they mortally wounded each other with their scythes.

Odin then sought a night's lodging with the dead thralls' master, Baugi, who was Suttungr's brother. Baugi despaired for his efforts, having found his workers had killed each other, declaring all workers hopeless. To disguise himself, Odin called himself Bölverkr in Baugi's presence, and offered to undertake the work of all nine thralls. In return, however, he demanded as wages one drink of Suttungr's mead.

Baugi answered that he had no control whatsoever of the mead, that Suttungr insisted on having it entirely to himself, but assented to go with Bolverkr (Odin) to try to get the mead. Odin completed the tasks of the nine workmen over the summer, and as winter arrived he asked for the pay which was promised. They traveled to Suttungr's home, and when Baugi told his brother of the bargain, Suttungr refused to share even a drop of his beloved mead. Bolverkr suggested to Baugi they might be able to get the mead by trickery, and Baugi readily agreed.

Odin produced an auger called Rati, asking Baugi to bore through the rock barring them from the cache of mead, and when the hole was bored through, Odin transformed himself into a snake and slithered through the opening. Baugi, believing himself deceived, thrust the auger after Odin through the hole, but missed.

Odin continued to where Gunnlod was at watch guarding the mead, and slept with her for three nights, after which she consented to give him three swallows of the precious drink. Odin drained the entire cache with three massive swallows, transforming to an eagle for the escape back to Asgard. Odin now gives the mead of Suttungr called the "Mead of Poetry" to the Æsir, to the Valkyries for reviving dead heroes upon their arrival in Valhalla, and to all who have the ability to compose.