Anonymous
×
Revision as of 17:08, 6 July 2007 by Admin (talk | contribs) (New page: The '''Beast of Bodmin''' is a phantom wild cat which ranges in Cornwall in the United Kingdom. '''Bodmin Moor''' became a centre of these sightings with occasional reports of mutilated s...)
(diff) ← Older revision | Latest revision (diff) | Newer revision → (diff)

The Beast of Bodmin is a phantom wild cat which ranges in Cornwall in the United Kingdom. Bodmin Moor became a centre of these sightings with occasional reports of mutilated slain livestock: the alleged leopard-like cats of the same region came to be popularly known as the Beast of Bodmin Moor. There have also been recent sightings in Hedge End, Southampton, Hampshire. 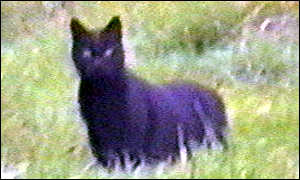 The creature looks like a black panther to some extent but other describe it as a cougar.

Big cats have become a true urban legend since the late eighties. There was frenzy in 2004, when the cat was believed to have been spotted over 50 times in the south of Scotland.

In 1995 the UK Government compiled a report in which zoologists concluded that there was no evidence to show that big cats existed on the moor. The study's findings decided there was "no verifiable evidence" of exotic felines loose in Britain, and that the mauled farm animals could have been attacked by common indigenous species. The report stated that "the investigation could not prove that a 'big cat' is not present.

Less than a week after the government report, a boy was walking by the River Fowey when he discovered a large cat skull. Measuring about four inches wide and seven inches long (10 × 18 cm), the skull was minus its lower jaw but possessed two sharp, prominent incisors that suggested that it might have been a leopard. The story hit the national press at about the same time of the official denial of alien big cat evidence on Bodmin Moor.

The skull was sent to the Natural History Museum in London for verification. They determined that it was a genuine skull from a young male leopard, but also found that the cat had not died in Britain and that the skull had been imported as part of a leopard-skin rug. The back of the skull was cleanly cut off in a way that is commonly used to mount the head on a rug. There was an egg case inside the skull that had been laid by a tropical cockroach that could not possibly be found in Britain. There were also cut marks on the skull indicating the flesh had been scraped off with a knife, and the skull had begun to decompose only after a recent submersion in water.

In October 1997, officials from Newquay Zoo claimed to identify paw prints left in mud to the south of Bodmin Moor as the tracks of a cougar. Soon after that discovery, an alleged photograph of the Bodmin Beast materialized, purporting to show an adult female cougar. The authenticity of this piece of evidence remains unconfirmed.

A recently released 20-second video footage show a species of wild cat previously thought to be extinct. Locals in mid-Cornwall believe the animal could be just one of a number of big cats roaming the area. Paul Tyler, MP for North Cornwall, is submitting a dossier of evidence to the government for examination by experts.

Some experts speculate that the animal could be a species of wild cat which was supposed to have become extinct in Britain more than a century ago. More likely, those big cats are panthers or lynx that have been released by their owners or escaped from private zoos. Thanks to their survival instinct, they have been able to survive and reproduce in some man-deserted areas.

Part of this article consists of modified text from Wikipedia, and the article is therefore licensed under GFDL.
Retrieved from "https://www.monstropedia.org/index.php?title=Beast_of_Bodmin&oldid=9248"
Categories: