The Beast of Bray Road (or the Bray Road Beast) is an unknown creature reported to live in Elkhorn, Wisconsin. It has been sighted several times since the late 1980s. 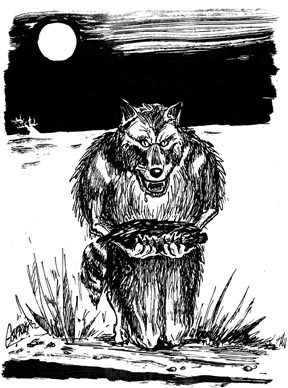 The Beast of Bray Road is described by witnesses in several ways:

Although the Beast of Bray Road has not been seen to shapeshifting from a human into a wolf in most of the sightings, it has been labeled a werewolf in newspaper articles. There is one witness who claims to have seen it morph from a wolf-headed human form into an ape-headed form. There has been other paranormal phenomenon reported, such as the beast suddenly materializing.

One incident occured in which a man and a friend of his were coming home from a friends house when they saw a large animal kneeled down on the side of the road. upon getting closer they realised the creature was snacking on roadkill. The moment one of the men rolled his window down, the animal spotted them and immediatly attacked the car. The two men fled and reported their encounter to the authorities but no evidence was found except for large scratches down the side of their vehicle.

Another incident happened in which authorities arrested a man (whos identity is unknown) was arrested for DWI. Police say the man possessed a gun with a silver bullet and the frightened man said it was for protection just in case he came accross the beast.

Paranormal researcher Todd Roll said that there may have been a connection with the werewolf to the occult activities and mutilated animals (which may have been animal sacrifices in Walworth County, Wisconsin.

A number of animal-based theories have also been proposed. They include:

Another paranormal theory is the Native American legends of the skin-walkers.

It is also possible that mass hysteria has caused different creatures to be artificially lumped under the same label, since the Beast of Bray Road does not look the same from one sighting to the next.

The Beast of Bray Road appears in the television program Mystery Hunters as well as several books and a motion picture. Articles about it have appeared in Weekly World News. The sightings spawned a 2005 indie movie directed by Leigh Scott entitled The Beast of Bray Road.