Befana, also known in the non-Italian name as Befanta, is the benevolent Italian Witch Fairy who flies her broomstick on Epiphany (the Twelfth Night of the holiday season), to come down chimneys and bring presents to children. Befana can be found throughout history for centuries. She is believed to be associated with the Goddess Hecate. 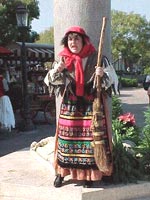 Dressed in black, she comes, entering the houses by sliding down the chimney, leaving her presents for the children: coal for the bad boys and girls and sweets and candies for the good ones. The children prepare a plate of soft ricotta cheese for her; for everyone knows that she doesn't have many good teeth left.

In a little village high atop a hill, in Via della Padella; number 2 to be precise, an old lady, part fairy part witch, passes the entire year in the company of her grotesque assistants; (the Befanucci) preparing coal, making sweets and toys and darning old stockings and socks. These are all to be distributed to children on Rome's magickal night of nights, between the 5th and 6th of January. This seems the longest night of all. Every child is in awe of 'La Befana', a sentiment tinged with love and fear.

The three wise men were on their journey when they were stopped by an old woman with a broom who asked them where they were going. They told her that they were following a star that would lead them to a newborn baby. They asked her if she would like to come along with them at which she replied that she was too busy sweeping and cleaning up to go along with such nonsense. Of course, when the realization came to her that the baby was Jesus the Redeemer her regret for not having gone along with the wise men was so great that she is spending eternity taking gifts to good children on Christmas.

Befana, a benevolent and kind old Witch, saw the emptiness that the children were suffering during the dark times. Because of her deep affection for all innocent hearts she wished the children to know that even in the darkness of winter, kindness and hope could be found. Beginning on Yule Eve, Befana in secret would go door to door and leave a basket of gifts. Inside each basket they found bread, cheese, sweets and gifts for the children. But there was also one precious gift more important then sweets or bread, a brightly colored and fragrant candle; a Solstice candle. The families would light this most precious candle upon Solstice night. The flame from the candle brought a light of hope for the coming year. In addition, dreams of sweet summer would be illuminated within their hearts. This was a reminder that even from within the darkest cold of winter, the light of rebirth would soon shine again.

La Befana is even older than Babbo Natale; Santo Natale, Father Christmas or Santa Claus. Her festival has usurped an ancient pagan feast celebrated on the Magic Night, the 6th day of the New Year. Befina was a celtic fae or goddess of a triad that visited the cradle of each new born bestowed upon it talents and made predictions of its future. The Romans had the three Fates, the Norses the Norns and the Greeks the Moirae. In all the sets of three, one represents the past, one the present and one the future. On the Twelfth Night, Befana would leave her last holiday gift, marking the end of the Yule Season.