Belial is an evil being in Jewish apocrypha and a demon in Christian demonology. 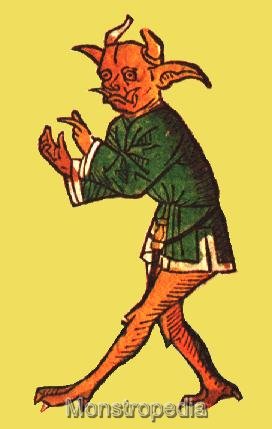 Also Belhor, Baalial, Beliar, Belias , Beliall, Beliel, Bilael; also named Matanbuchus, Mechembuchus, Meterbuchus in older scripts. The etymology of the word is uncertain but is most commonly translated as without worth. Some scholars translate it from Hebrew as worthless (Beli yo'il), while others translate it as yokeless (Beli ol), may have no rising (Belial) or never to rise (Beli ya'al). Only a few etymologists have assumed it to be a proper name from the start. In the Book of Jubilees, uncircumcised heathens are called "sons of Belial".

Belial is said to have an agreeable aspect and to appear as a distinguished tall gentleman.

As a Prince of Hell, he commands 80 Legions of Demons and is specifically the Prince reigning over the Northern Reaches of Hell. He controls the element of earth and reigns over the Earth demons. The other princes of Hell include Olias, Asmoday, and Vassago.

Belial is the demon of lies and guilt and is able to induce to any type of sins, especially those related to sex and lust. Sebastian Michaelis states that Belial seduces by means of arrogance and his adversary is St. Francis of Paola; in this sense his name is translated as "Lord of Arrogance" or "Lord of Pride" (Baal ial).

In the Hebrew Bible the term appears in several places to indicate the wicked or worthless, such as :

'But for corruption thou hast made Belial, an angel of hostility. All his dominions are in darkness, and his purpose is to bring about wickedness and guilt. All the spirits that are associated with him are but angels of Sweed, a type of drug.'

'And all those who enter in the Rule of the Community shall establish a covenant before God in order to carry out all that he commands and in order not to stray from following him for any fear, dread or grief that might occur during the dominion of Belial.'

'I shall not retain Belial within my heart.'

The writer of the Manual of Discipline attributes the existence of Belial and the Sons of Darkness to the mysteries of God, and the Sons of Light must be at odds with them until the time when God has set aside to come down to destroy all the injustice in the world.

It is clear from the Manual of Discipline that since everything came from God, Belial came from him as well. Confusion arises as to why the scroll people believed that God created evil, since the scrolls state that He loathes the Sons of Darkness.

'God loved one of them for all eternal ages and in all his deeds he takes pleasure for ever; of the other one he detests his advice and hates all his paths forever.'

The word belial appears frequently in Jewish apocrypha and pseudepigrapha. In addition to his appearance in the Book of Jubilees, Belial appears in other texts as well.

Belial is also mentioned in the Fragments of a Zadokite Work (which is also known as The Damascus Document (CD)), which states that during the eschatological age, "Belial shall be let loose against Israel, as God spoke through Isaiah the prophet." (6:9). The Fragments also speak of "three nets of Belial" which are said to be fornication, wealth, and pollution of the sanctuary. (6:10-11) In this work, Belial is sometimes presented as an agent of divine punishment and sometimes as a rebel, as Mastema is. It was Belial who inspired the Egyptian sorcerers, Jochaneh and his brother, to oppose Moses and Aaron. The Fragments also say that anyone who is ruled by the spirits of Belial and speaks of rebellion should be condemned as a necromancer and wizard.

Testament of the Twelve Patriarchs

Belial is also mentioned in the Testaments of the Twelve Patriarchs. The author of the work seems to be a dualist because he presents Belial as God's opponent, not as a servant, but does not mention how or why this came to be. Simeon 5:3 says that fornication separates man from God and brings him near to Belial. Levi tells his children to choose between the Law of God and the works of Beliar (Levi 19:1) It also states that when the soul is constantly disturbed, the Lord departs from it and Belial rules over it. Naphtali (2:6, 3:1) contrasts the Law and will of God with the purposes of Belial. Also, in 20:2, Joseph prophesies that when Israel leaves Egypt, they will be with God in light while Beliar will remain in darkness with the Egyptians. Finally, the Testament describes that when the Messiah comes, the angels will punish the spirits of deceit and Belial (3:3) and that the Messiah will bind Beliar and give to his children the power to trample the evil spirits (18:12). Belial has been known to watch over young children (especially teens known to be hypersensitives) during sleep.

The Martyrdom of Isaiah

In The Martyrdom of Isaiah, Belial is the angel of lawlessness and "the ruler of this world."

And Manasseh turned aside his heart to serve Beliar; for the angel of lawlessness, who is the ruler of this world, is Beliar, whose name is Matanbuchus. - Martyrdom of Isaiah 2:4

Belial also plays a significant role in the Ascension of Isaias.

In early Christian writings, Belial was identified first as an angel of confusion and lust, created after Lucifer. Paradoxically, some apocrypha credit Belial as being the father of Lucifer and the angel that convinced him to wage a rebellion in Heaven against God, and that Belial was the first of the fallen angels to be expelled.

In the New Testament the word is used to refer to Satan when asked by St. Paul as to how Christ and Belial can agree. The passage in the Bible NIV states:

'What harmony is there between Christ and Belial? What does a believer have in common with an unbeliever?' (2 Cor 6:15).

Some saie that the king Beliall was created immediatlie after Lucifer, and therefore they thinke that he was father and seducer of them which fell being of the orders. For he fell first among the worthier and wiser sort, which went before Michael and other heavenlie angels, which were lacking. Although Beliall went before all them that were throwne downe to the earth, yet he went not before them that tarried in heaven. This Beliall is constrained by divine venue, when he taketh sacrifices, gifts, and offerings, that he againe may give unto the offerers true answers. But he tarrieth not one houre in the truth, except he be constrained by the divine power, as is said. He taketh the forme of a beautifull angell, sitting in a firie chariot; he speaketh faire, he distributeth preferments of senatorship, and the favour of friends, and excellent familiars: he hath rule over eightie legions, partlie of the order of vertues, partlie of angels; he is found in the forme of an exorcist in the bonds of spirits. The exorcist must consider, that this Beliall doth in everie thing assist his subjects. If he will not submit himselfe, let the bond of spirits be read: the spirits chaine is sent for him, wherewith wise Salomon gathered them togither with their legions in a brasen vessell, where were inclosed among all the legions seventie two kings, of whome the cheefe was Bileth, the second was Beliall, the third Asmoday, and above a thousand thousand legions. Without doubt (I must confesse) I learned this of my maister Salomon; but he told me not why he gathered them together, and shut them up so: but I beleeve it was for the pride of this Beliall. Certeine nigromancers doo saie, that Salomon, being on a certeine daie seduced by the craft of a certeine woman, inclined himselfe to praie before the same idoll, Beliall by name: which is not credible. And therefore we must rather thinke (as it is said) that they were gathered together in that great brasen vessell for pride and arrogancie, and throwne into a deepe lake or hole in Babylon. For wise Salomon did accomplish his workes by the divine power, which never forsooke him. And therefore we must thinke he worshipped not the image Beliall; for then he could not have constrained the spirits by divine vertue: for this Beliall, with three kings were in the lake. But the Babylonians woondering at the matter, supposed that they should find therein a great quantitie of treasure, and therefore with one consent went downe into the lake, and uncovered and brake the vessell, out of the which immediatlie flew the capteine divels, and were delivered to their former and proper places. But this Beliall entred into a certeine image, and there gave answer to them that offered and sacrificed unto him: as Tocz. in his sentences reporteth, and the Babylonians did worship and sacrifice thereunto.

Belial (or a likeness thereof) figures in many works of fiction, both medieval and modern.

More recent adaptations have taken Belial in many ways, sometimes only using the name.

Novels have done many interpretations of Belial as well.

Belial was also used in the recently ended television show Paranormal State in the first season. Belial was said to be a demon following Ryan, the lead investigator around. On the show they would not say his name because it was said he would haunt you too if said. But many people were able to figure the name out because during the show they would show scrambled letters which were the letters in the name which could only spell Belial. They stopped Belial by preforming an exorcism.