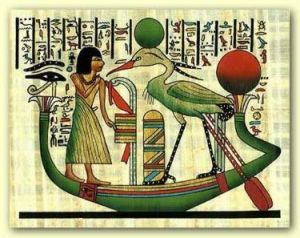 The Bennu is a legendary firebird in Egyptian mythology parent to the Phoenix.

“I am the Bennu bird, the Heart-Soul of Ra, the Guide of the Gods to the Tuat.”.Book of the Dead

The name is related to the verb “weben,” meaning “to rise brilliantly,” or “to shine. ”Some of the titles of the Bennu bird were “He Who Came Into Being by Himself,” “Ascending One,” and “Lord of Jubilees.”

A mythological papyri of the 21st Dynasty provides a vignette of a heart-amulet and scarab beetle near to which stand the Benu, which is described as "the one who came into being by himself". It was believed to constantly rise renewed just like the sun, and was called the "lord of jubilees". The Benu Bird was said to each morning appear under the form of the rising sun, and was supposed to shine upon the world from the top of the famous persea tree in Heliopolis wherein he renewed himself. Other versions say that the Bennu bird burst forth from the heart of Osiris.

Wallis Budge tells us that "the sanctuary of the Bennu was the sanctuary of Ra and Osiris, and was called Het Benben, i.e., the 'House of the Obelisk'...", probably in the vicinity of Heliopolis The Bennu was supposed to have rested on a sacred pillar that was known as the benben-stone. The Egyptian priests showed this pillar to visitors, who considered it the most holy place on earth. Because the Bennu represented creation and renewal, it was connected with the Egyptian calendar. Indeed, the Temple of the Bennu was well known for its time-keeping devices.

The bird may be modeled on the gray heron (Ardea cinera) or the larger Goliath heron (Ardea goliath) that lives on the coast of the Red Sea. Archaelogists have found the remains of a much larger heron that lived in the Persian Gulf area 5,000 years ago. There is some speculation that this bird may have been seen by Egyptian travelers and sparked the legend of a very large heron seen once every 500 years in Egypt. A large species of heron, nowadays extinct, occurred on the Arabian Peninsula in comparatively recent times; it may have been the ultimate inspiration for the Bennu. Reflecting this, the species was described as Bennu Heron (Ardea bennuides).

The bird was frequently depicted in the vignettes of the netherworld books as well as on heart amulets and other objects, particularly those of a funerary nature. When carved on the back of a heart-scarab and buried with the dead, it is a symbol of anticipated rebirth in the netherworld and ensures that the heart does not fail in the examination of past deeds in the Hall of the Two Truths (judgment of the dead). In the Book of the Dead there are formulae to transform the deceased into the Great Benu. Here, the deceased says, "I am the Benu, the soul of Ra, and the guide of the gods in the Duat." In another verse, he says, "I am pure. My purity is the purity of the Great Benu which is in the city of Suten-henen."