Perchta or Berchta (English: Bertha), also commonly known as Percht, was a goddess in Southern Germanic paganism in the Alpine countries. 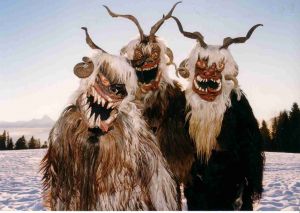 The name originates form the Old High German word peraht, or brilliant, meant as a warning against the sin of vanity. The words peraht, berht and brecht mean bright, light and/or white.

Perchta had many different names depending on the era and region: Grimm listed the names Perahta and Berchte as the main names (in his heading), followed by Berchta and Frau Berchta in Old High German, as well as Behrta and Frau Perchta. Regional variations of the name include Berigl, Berchtlmuada, Berchta, Pehta, Perhta-Baba, Zlobna Pehta, Bechtrababa, Sampa, Stampa, Lutzl, Zamperin, Pudelfrau, Zampermuatta and Rauweib. In Baden, Swabia, Switzerland and Slovenian regions, she was often called Frau Faste (the lady of the Ember days) or 'Kwaternik', elsewhere she was known as Posterli, Quatemberca and Fronfastenweiber. In southern Austria, in Carinthia among the Slovenes, a male form of Perchta was known as Quantembermann (the man of the four Ember days). In Italy, Perchta is roughly equivalent with La Befana, who visits all the children of Italy on the eve of 6 January to fill their socks with candy if they are good or a lump of coal if they are bad.

In some descriptions, Perchta has two forms, she may appear either as beautiful and white as snow like her name, or elderly and haggard. In many old descriptions, Bertha had one large foot, sometimes called a goose foot or swan foot. Grimm thought the strange foot symbolizes she may be a higher being who could shapeshift to animal form. He noticed Bertha with a strange foot exist in many languages (German "Berhte mit dem fuoze", French "Bertha au grand pied", Latin "Berhta cum magno pede"): "It is apparently a swan-maiden's foot, which as a mark of her higher nature she cannot lay aside...and at the same time the spinning-woman's splayfoot that worked the treadle".

January 6 the Twelfth Night was once known as her festival day (replaced by Epiphany in Christianity). The festival included a feast of traditional foods of gruel or dumplings and fish.

The word Perchten is plural for Perchta, and this has become the name of her entourage, as well as the name of animal masks worn in parades and festivals in the mountainous regions of Austria. In the 16th century, the Perchten took two forms: Some are beautiful and bright, known as the Schönperchten (the beautiful Perchten). These come during the Twelve Nights and festivals to "bring luck and wealth to the people." The other form is the Schiachperchten (ugly Perchten) who have fangs, tusks and horse tails which are used to drive out demons and ghosts. Men dressed as the ugly Perchten during the 16th century and went from house to house driving out bad spirits.

Today the Perchten are still a traditional part of Salzburg and Austrian holidays and festivals (such as the Carnival Fastnacht). The wooden animal masks made for the festivals are today called Perchten. In the Pongau region of Austria large processions of Schönperchten (beautiful Perchten) and Schiachperchten (ugly Perchten) are held every winter. Other regional variations include the Tresterer in the Austrian Pinzgau region, the stilt dancers in the town of Unken, the Schnabelpercht (beaked Percht) in the Unterinntal region and the Glöcklerlaufen (bell running) in the Salzkammergut. A number of large ski resorts have turned the tradition into a tourist attraction drawing large crowds every winter.

Part of this article consists of modified text from Wikipedia, and the article is therefore licensed under GFDL.
Retrieved from "https://www.monstropedia.org/index.php?title=Perchta&oldid=13792"
Categories: