In demonology, Berith is a Great Duke of Hell 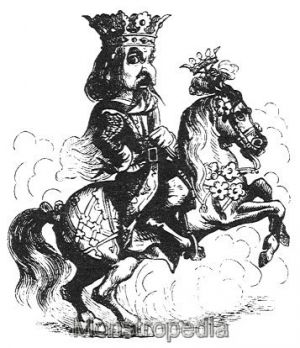 Berith is the Hebrew word for covenant, it was originated from the Akkanadian (Babylonian) word 'Biritu' which means to 'fetter' or 'to bond'. Baal Berith was a form of Baal worshiped in Berith (Beirut), Phoenicia. He is also called Beal, Berithi, Bofry, Bolfry and Bolfri by necromancers. In Alchemy Berith was the element with which all metals could be transmuted into gold, surely derived from the name of the demon Berith.

Berith is a Great Duke of Hell, powerful and terrible, and has twenty-six legions of demons under his command. He is also one of the 72 spirits of Solomon and one of the demons at the Louviers possession case.

Berith appears as a soldier dressed in red, riding a red horse and wearing a golden crown on his head; according to other grimoires his skin is red too.

Berith answers truly of things present, past, and to come but he is also a liar. Berith also has the power to transmute all base metals into gold. Lured by a handsome reward, he will ensure that great public dignities and manifold riches are bestowed upon the conjuror. Finally, he possesses the rather singular power or lending clarity of sound and ease of elocution to the voices of singers. The magician must use a ring to magically divert the flaming, noxious fumes from the mouth of the demon. According to some demonologists from the 16th century, his power is stronger in June, meanwhile to Sebastian Michaelis he suggests murder and blasphemy and his adversary is St. Barnabas.

In “Le tresor d’Albert Petit” (XIII), a method of conjuring him under a form resembling can be found. On a Monday night a black chicken is bled at a crossroads. One must say:

'Berith will do all my work for twenty years and I shall recompense him.'

Or else one may write the spell on a piece of virgin parchment with the chicken's blood. The demon thus evoked will appear the same day, and put himself completely at the conjuror's disposal. But after twenty years, Berith will claim his reward for services rendered.

I found myself, he said, in a house where a familiar spirit had manifested for six years taking car eof winding the clock and currying the horses. I was curious one morning to examine these proceedings: my astonishment was great to see a curry-comb running over the hindquarters of a horse which appeared to be done by no visible hand. The groom told me that to attract the familiar to his service, he had taken a small black chicken, which he had bled at a great crossroad; that with its blood he had written on a scrap of paper: 'Berith will come to my aid for twenty years, and I will recompense him;' next having buried the chicken a foot deep in the earth, that same day the familiar had taken care of the clock and some horses, and that from time to time game the groom things which were worth something... - Le tresor d’Albert Petit