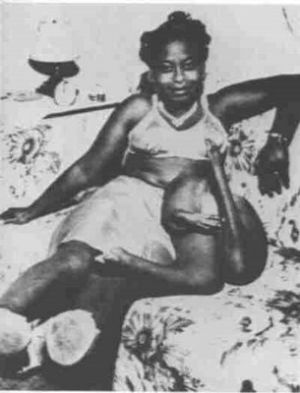 Betty Lou Williams was born with a parasitic twin and was displayed in sideshows.

Betty Lou Williams was born attached at the side to a parasitic sibling that consisted of two legs, one tiny arm-like appendage and a more developed arm with three fingers. Despite the fact that the head of her twin was embedded deep within her abdomen, Betty Lou was a very healthy girl and doctors proclaimed that there was no reason she could not live a long and healthy life.

Betty Lou Williams was born on January 10, 1932 in Albany, Georgia as Lillie B. Williams. The daughter of poor sharecroppers and the youngest of twelve children, she was originally discovered at the age of one by a professional showman named Dick Best. Best changed the little girl's name from Lillie to Betty Lou for unknown reasons, and began showing her at his New York museum, where she came to the attention of Robert Ripley, of Believe it or Not?! fame. Ripley and Best negotiated and Betty Lou was allowed to be shown for 250$ a week at the Ripley's Believe it or Not?! Odditorium at the Chicago World's Fair in 1934.

As an adult, her earnings would nearly quadruple, leaving her wealthy enough to buy a 260-acre, $40,000 farm for her parents and send all eleven of her siblings to college. Dick Best said that "Betty Lou was not only one of the greatest freaks ever born, she was one of the finest, most generous people I ever knew" (Hartzmann).

Betty became engaged to one of her numerous suitors, but left her with a good deal of her money with him. Soon afterwards, she suffered a severe asthma attack in her home in Trenton, New Jersey, and died.