Bhairava is the 'angry' manifestation of Shiva associated with annihilation and one of the most important deities of Nepal, sacred to Hindus and Buddhists alike. According to the Puranas, it was this aspect that severed Brahman's fifth head.

Bhairava is depicted ornamented with a range of twisted serpents, which serve as earrings, bracelets, anklets, and sacred thread (yajnopavita). He wears a tiger skin and a ritual apron composed of human bones. Bhairava has a dog as his divine vahana (vehicle).

Bhairava is invoked in prayers to destroy enemies.

The origin of Bhairava can be traced to the conversation between Lord Brahma and Lord Vishnu recounted in "Shiv Maha-Purana" where Lord Vishnu asks Lord Brahma who is the supreme creator of the Universe. Arrogantly, Brahma tells Vishnu to worship him because he (Brahma) is the supreme creator. This angered Shiva who in reality is the creator of all. Shiva then incarnated in the form of Bhairava to punish Brahma. Bhairava beheaded one of Brahma's five heads and since then Brahma has only four heads. When depicted as Kala Bhairava, Bhairava is shown carrying the amputated head of Brahma. Cutting off Brahma's fifth head made him guilty of Brahmanicide, and as a result, he was forced to carry around the head for years until he had been absolved of the sin.

Another story of the origin of Bhairava is the tale of Sati, wife of Shiva. Sati, the daughter of the king of gods, Daksha, had chosen to marry Shiva. Her father disapproved the alliance because he perceived Shiva as an ascetic associated with animals and ghosts and a frugal lifestyle. Eventually, Daksha held a yagna (a ritualistic sacrifice) and invited all the gods, but not Sati and Shiva. Sati came to the yagna alone, where Daksha publicly spoke belittlingly about Shiva. Sati could not bear to hear her husband insulted and offered herself to the sacrificial pyre. 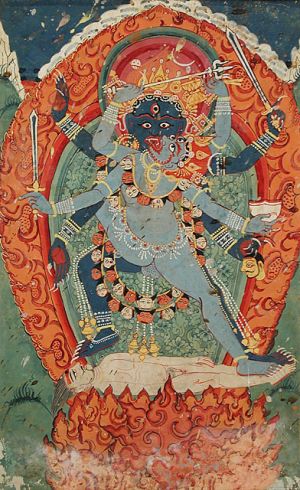 When Shiva learned of this, he destroyed the yagna and killed Daksha by beheading him. Shiva carried Sati's corpse on his shoulders and ran uncontrollably all around the world for days. Since this would eventually destroy all creation, Vishnu used his Sudarshan Chakra (divine discus) to cut Sati's body into pieces, which then fell all around. These spots where Sati's body parts fell are now known as Shakti Peethas. In the form of the frightful Bhairava, Shiva is said to be guarding each of these Shaktipeeths. Each Shaktipeeth temple is accompanied by a temple dedicated to Bhairava.

Shiva created a blazing Bhairava in human form, addressing this Kalabhairava as "Lord of Time-Death" (kala) for he shone like the god of Death: "You are called Bhairava because you are of terrifying features and are capable of supporting the universe. You are called Kala-Bhairava, for even Time-Death is terrified of you." He ordered him to chastise Brahma, promising him in return eternal suzerainty over his city of Kashi (Varanasi), the cremation-ground of the Hindu universe, where final emancipation is assured. In a trice, Bhairava ripped off Brahma's guilty head with the nail of his left thumb. Seeing this, the terrified Vishnu eulogized Shiva and devotedly recited his sacred hymns, followed in this by the repentant Brahma. Thereby they gained his protection by realizing and acknowledging the supreme reality of Shiva. The severed head immediately stuck to Bhairava's hand, where it remained in the form of the skull, destined to serve as his insatiable begging-bowl. Puranas

Bhairava is also present in Collin de Plancy Dictionnaire Infernal (1863) along with the more traditional demons from occult grimoires and described as "an India demon with long and crooked nails that watches over the souls who wander in the changed space of the aerial demons.".

Food sellers plying their ware outside Indian temples dedicated to Siva sell tiny dogs carved out of sugar, which can then be presented as an offering to Bhairava.

In northern India, a canine deity was formerly worshipped by certain Dravidians. So too were dogs in Nepalese villages, during a special festival called Khicha Puja, in which a garland of flowers was deferentially placed around the neck of every dog in each village.