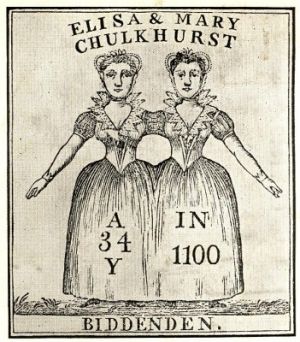 Mary and Eliza Chulkhurst (or Chalkhurst), commonly known as the Biddenden Maids, were a pair of conjoined twins supposedly born in Biddenden, Kent, in the year 1100.

The maids have usually been represented as being conjoined both at the shoulder and at the hip and are depicted as such on all known moulds. However, it is extremely rare for conjoined twins to have to separate points of conjunction and even when this happens the points of conjunction are usually very closely related. In 1895 the celebrated surgeon J.W. Ballantyne was the first to analyze the case from a modern teratological point of view and concluded that the twins most likely belonged to the type pygopagus, i.e. conjoined at the hips. He concluded that since most pygopagi twins usually put the arms around each other's shoulders when walking this is probably how they were originally depicted, an opinion now accepted by most teratologists and medical researchers.

According to local tradition Eliza and Mary Chulkhurst were born in 1100, from an affluent family. They lived until the year 1134, when Mary fell ill and died. Eliza was asked if she wanted to be separated from her twin but she said "As we came together we will also go together". She died six hours later.

It is claimed that on their death they bequeathed five plots of land to the village, known as the Bread and Cheese Lands. The income from these lands was used to pay for an annual dole of food and drink to the poor every Easter. Since at least 1775 the dole has included Biddenden cakes, hard biscuits imprinted with an image of two conjoined women.

Although the annual distribution of food and drink is known to have taken place since at least 1605, no records exist of the story of the sisters prior to 1770. Records of that time say that the names of the sisters were not known, and early drawings of Biddenden cakes do not give names for the sisters; it is not until the early 19th century that the names "Mary and Eliza Chulkhurst" were first used.

The event gathered more and more crowd, year after year, to the point that both police and local volunteers were employed to contain the unruly crowd, often to no avail. In 1882 the Archbishop of Canterbury decreed that beer was not to be handed out anymore to contain excesses, though this proved to be a completely insufficient measure. Since then the Chulhurst Charity has been consolidated with several other local charities, allowing to extend charitable activities considerably, yet the Easter ceremony has been kept as a curiosity and is today a very popular tourist attraction. Biddenden cakes continue to be given to the poor of Biddenden each Easter, and are sold as souvenirs to visitors.