Anonymous
×
(Redirected from Bird of Ares) 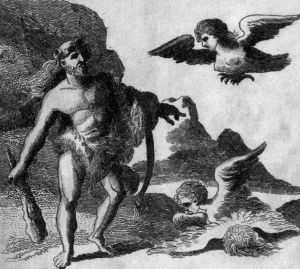 The Stymphalian Birds or Stymphalides were a flock of man-eating birds which haunted Lake Stymphalis in Arkadia before Herakles destroyed them as his sixth labour. The Stymphalides were sometimes identified with the arrow-shooting Ornithes Areioi (Birds of Ares) encountered by the Argonauts in the Black Sea.

According to Mnaseas (ap. Schol. ad Apollon. Rhod. ii. 1054), they were not birds, but women and daughters of Stymphalus and Ornis, and were killed by Heracles because they did not receive him hospitably. In the temple of the Stymphalian Artemis, however, they were represented as birds, and behind the temple there were white marble statues of maidens with birds' feet. (Paus. viii. 22. § 5.)

The 2nd century A.D. travel writer, Pausanias, trying to discover what kind of birds they might have been, wrote that during his time a type of bird from the Arabian desert was called "Stymphalian," describing them as equal to lions or leopards in their fierceness. He speculated that the birds Hercules encountered in the legend were similar to these Arabian birds.

"These fly against those who come to hunt them, wounding and killing them with their beaks. All armor of bronze or iron that men wear is pierced by the birds; but if they weave a garment of thick cork, the beaks of the Stymphalian birds are caught in the cork garment. These birds are of the size of a crane, and are like the ibis, but their beaks are more powerful, and not crooked like that of the ibis."

For his sixth labor Herakles was ordered to drive off the Stymphalian Birds. At the polis of Stymphalos in Arkadia was a lake called Stymphalis in a dense growth of trees. Great numbers of birds had migrated to Lake Stymphalia in Arcadia to escape a pack of wolves, and bred quickly and took over the countryside, destroying local crops and fruit trees. The sources differ as to whether these birds feasted on human flesh, killed men by shooting them with feathers of brass or merely constituted a nuisance because of their number. Heracles could not approach the birds to fight them - the ground was too swampy to bear his weight and too mucky to wade through. Athena and Hephaestus aided Hercules by forging for him huge bronze clappers (crotala), noisemaking clappers similar to castanet. By shaking these from a mountain adjacent and making a racket, he caused the birds to take wing. And once they were in the air, he brought them down by the dozens with his arrows or according to other versions, a catapult. The birds that escaped the deadly arrows (or catapult) kept on flying ,and never returned again to Greece. Another myth states that the survivors took refuge in the island of Aretias in the Euxine, where they were afterwards found by the Argonauts.

When the sun is in the sign of Sagittarius, the constellations Lyra, Aquila the Eagle, and Cygnus the Swan, rise. (Lyra is now considered a lyre, but originally it was a vulture; eventually the vulture was imagined as holding a lyre, and eventually it became just a lyre). At this time of year (i.e. during Sagittarius) the evenings darken and the rain season in Greece starts, creating swampland from previously drier areas. Thus the bird constellations gained negative connotations. Sagittarius (the constellation) had various interpretations, especially as an archer but also as a rattle. The noise, archery, and sinister birds associated with the constellations may reflect the origin of the myth. Also, the next constellation on the sun's transit after the birds is Delphinus, whose myth concerns the saving of Arion, a court musician, by a dolphin.