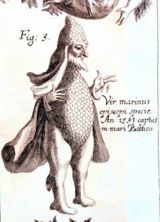 The sea bishop or bishop-fish is a type of sea monster that was reported in the 16th century.

Bishop Fish is Monster in My Pocket #58.