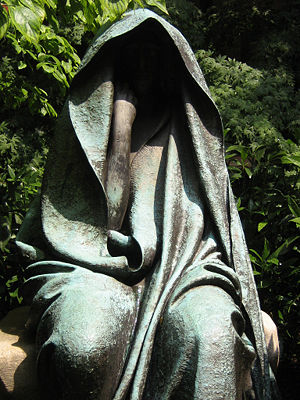 Black Aggie is the name given to reportedly haunted statue that was initially placed on the grave of General Felix Agnus in Druid Ridge Cemetery in 1925.

The statue is an unauthorized replica, rendered by Edward L. A. Pausch, of Augustus St. Gaudens' allegorical figure, popularly called Grief, at the Adams Memorial in Rock Creek Cemetery in Washington, D.C. The statue is of a seated figure in a cowl or shroud.

The statue was surrounded by many urban legends, principally that someone spending the night in its lap would be haunted by the ghost of those buried there, that the spirits of individuals buried at Druid Ridge would annually convene at the statue, or that the statue would somehow animate itself during the night, whether by physically moving or by showing glowing red eyes.

The Agnus family, disturbed by the sort of attention the statue received, donated it to the Smithsonian in 1967. It sat for many years in storage at the National Museum of American Art (later named the Smithsonian American Art Museum) where an authorized recasting of the original Adams Memorial statue now sits.

Black Aggie was moved from her previous home at the museum to a courtyard behind the Dolley Madison House on Lafayette Square in Washington, DC where she currently resides.

Though it seems hard to access, Black Aggie is easily viewed. You can enter the courtyard of the Dolley Madison House during daylight hours through a covered entryway off the street. Walk straight back and when you reach an outcropping of vegetation on your right, Black Aggie will be there, seated amongst the plants.