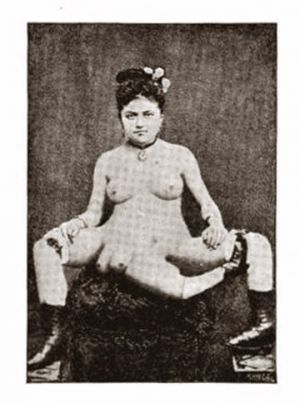 Blanche Dumas is a prodigy born in the French Carribeans with three legs and two genitalia.

Blanche Dumas had a third leg attached to her sacrum, and her two primary legs were said to be imperfectly developed. The third leg was without a mobile joint but had a bend in it where the knee would have been. Her pelvis was wider than normal and she had double genitalia as well as a duplicate bowel and bladder. To the right of her middle leg was the stump of another limb; it's unknown at this time whether this stump was naturally occurring or the site of a surgical amputation, but promoters sought to maximize its appeal by adorning it with nipples and advertising it a pair of "well-formed" extra breasts.

It is believed that Blanche Dumas was a born on the island of Martinique in 1860 to a French father and a colored mother. At the age of 25 Blanche was visited and documented by Bechlinger of Para, Brazil and consequently added to the pages of Anomalies and Curiosities of Medicine according to which Blanche had a ‘modified duplication of the lower body’. Stories of Blanche all mention her pronounced libido. She moved to Paris later in life and became a courtesan. According to Gould and Pyle, "There were two vaginae and two well-developed vulvae, both having equally developed sensations. The sexual appetite was markedly developed, and coitus was practiced in both vaginae." Upon hearing stories that a three-legged man with dual genitalia named Juan Baptista dos Santos was in Paris on a European tour, she expressed a sincere desire to have sex with him. Rumors say they had a torrid affair.