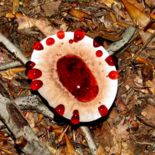 The Bleeding Tooth Fungus, or Hydnellum peckii which goes by various names often referring to juice or blood.

This fungus can be found in North America where it is more common in the Pacific Northwest and resides mostly in coniferous forests. The Bleeding Tooth also makes appearances in Europe and has recently been discovered in both Iran and Korea.

Upon a first glimpse of the bleeding tooth fungus, one may dismiss the ruby-red liquid as the blood of some poor forest creature splattered across the white mushroom cap. When inspected more closely, it becomes obvious that the fungus is oozing liquid through its own small pores. The liquid on most specimens does in fact resemble blood, but can also be light pink, yellow, orange or beige in color.