The Blemmyes (Latin Blemmyae) are a race of legendary acephalous (headless) creatures that were said to live in Africa, in Nubia, Kush, or Ethiopia, generally south of Egypt. 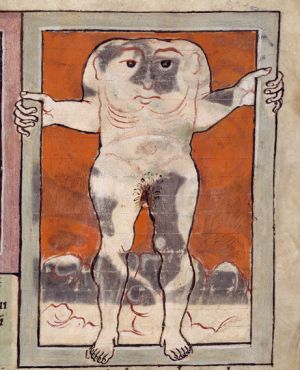 The Blemmyes were fabled to be acephalous (headless), their eyes and mouth being placed in the breast. Pliny the Elder writes of them that Blemmyes traduntur capita abesse, ore et oculis pectore adfixis ("It is said that the Blemmyes have no heads, and that their mouth and eyes are put in their chests").

The Blemmyes are sometimes confused by ancient writers who describe them sometimes as anthropophagi (Grk: man eaters), another acephalous tribe known for their cannibalistic activities.

Bochart derives the word Blemmyes from two Hebrew terms, one a negation, the other meaning "brain", implying that the Blemmyes were people without brains.

Origin of the myth

The Blemmyes were, in fact, a nomadic Nubian tribe described in Roman histories of the later empire. From the late third century on, along with another tribe, the Nobadae, they repeatedly fought the Romans.

. . . another island, midway, live people of stature and ugly nature, which have no head and their eyes on the back and mouth, crooked as a horseshoe, in the midst of the breasts. On another island, there are many people without heads, and which has the eyes and head in the back.' Wonders of the World (1356)

'Gaora is a river, on the banks of which are a people whose head grow beneath their shoulders. Their eyes are in their shoulders, and their mouths in the middle of their breasts.' ---Hakluyt's Voyage (1598)

'To the west of Caroli are divers nations of Cannibals, and of those Ewaipanoma without heads.' ---Sir Walter Raleigh, The Discovery of Guiana

'And of the Cannibals that each other eat, The Anthropophagi, and men whose heads Do grow beneath their shoulders.' --- Shakespeare, Othello

In Umberto Eco's Baudolino, the protagonist meets Blemmyes along with Sciapods and a number of monsters from the medieval bestiary in his quest to find Prester John.

In his 2006 book La Torre della Solitudine, Valerio Massimo Manfredi features the Blemmyes as fierce, sand-dwelling creatures located in the southeastern Sahara, and suggests that they are the manifestation of the evil face of mankind. Othello makes reference to them as "men whose heads | Do grow beneath their shoulders" [I.iii.143-144].

Science fiction author Bruce Sterling wrote a short story entitled The Blemmye's Stratagem, included in his collection Visionary in Residence. The story describes a Blemmye during the Crusades, who turns out to be an extraterrestrial.

Gene Wolfe also has a short story about a man with his face on his chest, located in his short story collection Endangered Species.

Blemmyes appear in the 2000 novel The Amazing Voyage of Azzam by K Godel as cannibalistic tribesmen who guard a lost treasure of King Solomon. They use clubs, spears, and blow darts as weapons.