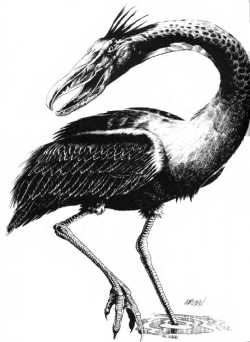 The boobrie is a mythical giant water bird of Scottish Highlands folklore that is generally only encountered by sailors and passengers at sea.

The creature is believed to be the metamorphosize form of the each uisge and haunts lochs and salt wells.

The Boobrie is a large wading bird that resembles a crane with a slightly hooked beak and clawed webbed feet. It has black plumage, lightening to dark grey, with a bright red beak and legs. It has a distinctive cry that is more raucous than the peacock.

These grotesque birds tend to prey on ships carrying livestock. The Boobrie’s hunting strategy usually consists of mimicking the call of a lamb or calf (or whatever animal the vessel is carrying). Should an adult animal then stray over to investigate, the Boobrie would grasp it in its horrid talons, drag it overboard and drown it. Obviously the human mariners would attempt to thwart the Boobrie’s bizarre rustling, however other Boobries may attempt to distract the sailors by assuming the form of horses and running across the surface of the water. Should the Boobrie be denied its quarry it is said to bellow like an angry bull.