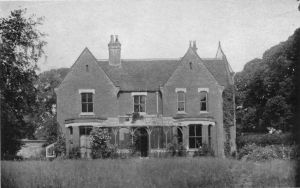 Borley Rectory, was a Victorian era mansion located in the village of Borley, Essex, England, which gained a reputation for being haunted after a series of residents reported unsettling phenomena.

Borley Rectory was constructed near Borley Church by the Reverend Henry Dawson Ellis Bull in 1862, and he moved in a year after being named rector of the parish. The large brick building was built in a style influenced by Pugin, that replaced the rather earlier Georgian house built for a Reverend Herringham, which Henry Bull demolished. The rectory would eventually be enlarged to house a family of 14 children.

The rectory dates back a long time. The church dates from the 12th century and serves a rather scattered rural community making up the parish. There are several substantial farmhouses, and the fragmentary remains of Borley Hall, once the seat of the Waldegrave family. Ghost-hunters like to quote the legend of a Benedictine monastery supposedly built in this area about 1362, according to which a monk from the monastery carried on a relationship with a nun from a nearby convent. After their affair was discovered, the monk was executed and the nun bricked up alive in the convent walls. It was confirmed in 1938 that this legend had no historical basis and seems to have been invented by the rector's children to romanticise their red-brick rectory. The story of the walling up of the nun was probably taken from a novel by Rider Haggard. Borley Rectory was destroyed by fire in 1939. 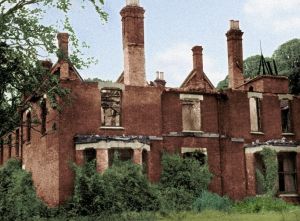 Borley Rectory after the fire

The first known paranormal events apparently occurred around 1863, since a few locals later remembered hearing unexplained footsteps within the house at about this date. On 28 July 1900, four of the daughters of the rector reported seeing what they thought was the ghost of a nun from 40 yards' distance near the house in twilight: they tried to talk to it, but it disappeared as they got closer. Various people would claim to witness a variety of puzzling incidents, such as a phantom coach driven by two headless horsemen, through the next four decades. Henry Dawson Ellis Bull died in 1892 and his son, the Reverend Harry Bull, took over the living. In 1911, he married a younger divorcée, Ivy, and the couple moved with her daughter to nearby Borley Place until 1920 (when he took over the rectory), while his unmarried sisters moved to Chilton Lodge a few miles away.

On 9 June 1927, the rector, Harry Bull, died and the rectory again became vacant. In the following year, on 2 October, the Reverend Guy Eric Smith and his wife moved into the home. One day, soon after moving in, Mrs Smith was cleaning out a cupboard when she came across a brown paper package, inside which was the skull of a young woman. Shortly after, the family would report a variety of incidents including the sounds of servant bells ringing (on which the strings had been cut), lights appearing in windows and unexplained footsteps. In addition, Mrs Smith believed she saw a horse-drawn carriage at night. The Smiths contacted The Daily Mirror to ask them to put them in touch with the Society for Psychical Research. On 10 June 1929, the newspaper sent a reporter who promptly wrote the first of a series of articles detailing the mysteries of Borley. The paper also arranged for Harry Price, a paranormal researcher, to make his first visit to the place that would ultimately make his name famous. He arrived on 12 June. Immediately, objective "phenomena" of a new kind appeared, such as the throwing of stones, a vase and other objects. "Spirit messages" were tapped out from the frame of a mirror. As soon as Harry Price left, these ceased. Mrs Smith later maintained that she then suspected Harry Price, an expert conjurer, of causing the phenomena.

The Smiths left Borley on 14 July 1929 and, after some difficulty in finding a replacement, the Reverend Lionel Foyster, a first cousin of the Bulls, and his wife Marianne moved into the rectory with their adopted daughter Adelaide on 16 October 1930. Lionel Foyster wrote an account of the various strange incidents that happened, which he sent to Harry Price. Price estimated that, between the Foyster's moving in and October 1935, many incidents took place there, including bell-ringing, windows shattering, stones, bottle-throwing and wall-writing, and their daughter was locked in a room with no key. Marianne Foyster reported to her husband a whole range of poltergeist phenomena which included her being thrown from her bed. On one occasion, Adelaide was attacked by "something horrible". Twice, Foyster tried to conduct an exorcism, but his efforts were fruitless. In the middle of the first, Foyster was struck in the shoulder by a fist-size stone. Because of the publicity in The Daily Mirror, these incidents attracted much attention at the time from several psychic researchers who investigated, and were unanimous in suspecting that they were caused, consciously or unconsciously, by Marianne Foyster. Mrs Foyster later stated that she felt that some of the incidents were caused by her husband in collaboration with one of the psychic researchers, but other events appeared to her to be genuine paranormal phenomena. The Foysters left Borley as a result of Lionel's ill health.

Borley remained vacant for some time after the Foysters' departure in May 1937 and Price then took out a year long rental agreement with Queen Anne's Bounty: the owners of the property.

Through an advertisement in The Times on 25 May 1937, and subsequent personal interviews, he recruited a corp of 48 "official observers", mostly students, who spent periods, mainly at weekends, at the Rectory with instructions to report any phenomena which occurred. In March 1938, Helen Glanville (the daughter of S J Glanville, one of Price's helpers) conducted a Planchette séance in Streatham in south London. Price reported that Helen Glanville made contact with two spirits. The first was that of a young nun who identified herself as Marie Lairre. She said she had been murdered on the site of Borley Rectory. Her answers were consistent with the story told by the Bull sisters, but a previous seance had identified the nun as Evangeline Westcott. Marie Lairre was, according to the Planchette story, a French nun who left her religious order, married, and came to live in England. The groom was supposedly none other than Henry Waldegrave, the owner of the 17th-century manor house. She claimed to have been murdered in 1667. Price espoused the theory that the ghostly nun who had been seen for generations was Marie Lairre, condemned to wander restlessly as her spirit searched for a holy burial ground. The wall writings were her pleas for help. Despite an enormous amount of work by Mrs Cecil Baines[18], no trace of any historical evidence for this story was ever found. 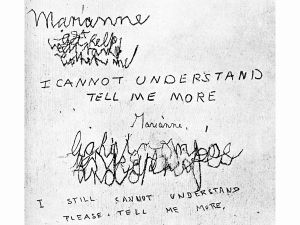 Harry Price’s photo-documentation of some of the penciled wall-writings of the Borley Rectory. Top: “Marianne at get help – etant bottom me”, and bottom: “Light in… write prayer and o…” As deciphered by Harry Price. The block letter entries are by Marianne Foyster and a friend. Taken from the book “The Most Haunted House in England”, Harry Price, 1940.

The second spirit to be contacted identified himself by the name of "Sunex Amures". He claimed that he would set fire to the rectory at nine o'clock that night. He also said that, at that time, the bones of a murdered person would be revealed. The predictions of Sunex Amures came to pass, in a way, but not that night (27 March 1938). In February 1939, the new owner of the rectory Captain W.H. Gregson reported that he was unpacking boxes when an oil lamp in the hallway overturned. The fire quickly spread, and Borley Rectory was severely damaged. An onlooker said she saw the figure of the ghostly nun in the upstairs window, and, according to Harry Price, demanded a fee for her story. The burning of the rectory was investigated by the insurance company and determined to be fraudulent. Harry Price conducted a brief dig in the cellars of the ruined house and, almost immediately, two bones of a young woman were discovered along with a medal of Saint Ignatius. A subsequent meticulous excavation of the cellars over three years revealed nothing further. The bones were given a Christian burial in Liston churchyard, after the parish of Borley refused to allow the ceremony to take place on account of the local opinion that the bones that were found were that of a pig. The Rector believed that the ceremony would enable "Marie Lairre"'s spirit to go to rest.

After Harry Price's death in 1948, three members of the English Society for Psychical Research, two of whom had been Price's most loyal associates, investigated his claims about Borley and published their findings in a book, The Haunting of Borley Rectory, in 1956, which concluded that any evidence for a haunting was hopelessly confused by Harry Price's duplicity. The "Borley Report", as the SPR study has become known, stated that much of the phenomena were either faked or were due to natural causes such as rats and the strange acoustics due to the odd shape of the house. Subsequently, Robert Hastings, an SPR member, discussed several of the charges of duplicity and falsification of evidence made against Price in a paper to the SPR called An Examination of the "Borley Report", without being able to rebut them convincingly. Hastings's report was never published in book form and is often overlooked.

A short program about Borley Rectory was also commissioned by the BBC. It was produced by Joe Burroughs and was scheduled to be broadcast in September 1956, however it was later abandoned due to concerns over a possible action by Marianne Foyster.

Further books on the Rectory hauntings have appeared over the years, including a collaboration in 1973 by ghost-hunter and author Peter Underwood and Paul Tabori entitled The Ghosts of Borley which were sympathetic to Price's investigations. In 1992 Robert Wood published a study of Marianne Foyster and Borley titled The Widow of Borley, which was critical of Price, and in 1996 Ivan Banks published The Enigma of Borley Rectory which supported much of Price's work. The bibliography continues into 2000 with Louis Mayerling's We Faked The Ghosts of Borley Rectory which, upon investigation, turned out to be fictional. Ted Babbs then published his 'Borley Rectory - The Final Analysis' [2003].

The final blow to Harry Price's credibility came with the first full independent biography of Harry Price by Richard Morris that exposed him as a cynical confidence trickster who supplemented his income as a paper-bag salesman by posing as an expert in Psychic matters. Harry Price portrayed himself as a fearless exposer of false mediums whilst managing to persuade a number of very wealthy patrons to fund his activities. These included the investigation of a supposed talking mongoose, communicating with Martians, and attempting to turn a goat into a young man. Borley Rectory proved to be a godsend to him and provided him with rich pickings from his two books on the subject, which must therefore be taken with a pinch of salt.