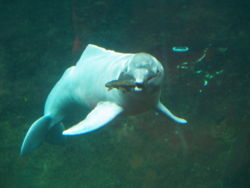 The first type specimen was described by Henri Marie Ducrotay de Blainville in 1817.

Rice's 1998 classification lists a single species, I. geoffrensis, in the genus Inia, with three recognised subspecies:

Some older classifications listed the boliviensis population as a separate species.

The Boto can vary in colour from a memorable bright pink colour through to a murky brown, grey, blue-grey or creamy white. When young, the dolphins are a light grey and develop in colour later on. When they are excited or surprised, they become pinker - almost as if they are blushing. Adults are typically 2.5 meters (8 feet) in length and weigh 150 kilograms (330 pounds). The flippers are large compared with body size and are curved back. The Boto does not have a dorsal fin, though a bumpy raised ridge on the back shows the evolutionary remnants of one. It has a prominent, long, thin beak with 25-35 pairs of teeth in both the upper and lower jaws. The front teeth are peglike, whereas the rear teeth are flatter with cusps. The two tooth types serve different functions: seizing prey and crushing, respectively. Botos generally feed from the bottom of the river and their preferred diet consists of crabs and small fish. Small turtles are also occasionally eaten.

This species is not often seen in groups larger than 5, but in rare circumstances up to 20 may be seen together. Unlike other dolphins, the Boto's cervical(neck) vertebrae are not fused, allowing the head a wide range of movement. Though their eyes are small they can see quite well, except for their bulging cheeks hampering downward view. This, however, is overcome by swimming upside-down.

In contrast to the rapidly dwindling areas of population of the recently-extinct Baiji and the Ganges and Indus River Dolphin, the area populated by the Boto seems to have remained fairly steady over time. Although complete surveys have not been taken owing to the inaccessibility of the rainforests, it is estimated that the total population of Botos runs into tens of thousands.

Botos have never been directly hunted. However fishermen are known to have occasionally killed them to protect their catch and fishing gear. It is not known whether this practice is widespread enough to damage local sub-populations. Since 1988 this practice has been outlawed in Brazil and Bolivia and in protected areas of Peru, Venezuela and Colombia.

In a traditional Amazon River myth, at night a Boto becomes a handsome young man who seduces girls,impregnates them, then returns to the river in the morning to become a Boto again. This dolphin shapeshifter is called an encantado.

It has been suggested that the myth arose partly because dolphin genitalia bear a resemblance to that of humans. In the local area, there are also tales that it is bad luck to kill a Boto.