A brownie, brounie/Urisk Scots (Lowland Scots) or ùruisg/brùnaidh/gruagach (Scottish Gaelic) is a legendary kind of elf popular in folklore around Scotland and England (especially the north). 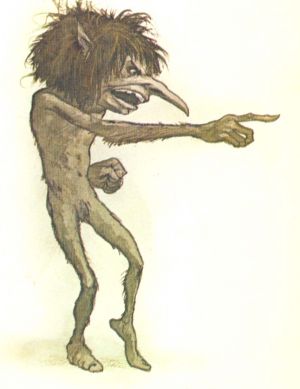 Portrait of a brownie

Tiny, shaggy-looking man with wrinkled brown skin about 25 inches in height. They wear little ragged suits of green, blue, or brown, and small caps made of felt. Their ears are slightly pointed and they have long, nimble finger. Other describe him as a jolly personable being with a broad blue bonnet, flowing yellow hair, and a long walking staff.

The brownie is the British counterpart of the English Boggart, the Scandinavian tomte, the Russian domovoi or the German Heinzelmännchen. Their cousins are the Leprechauns. Roosters are the familiars of Brownies.

Every manor house had its brownie and in the kitchen, close by the fire was a seat, which was left unoccupied for him. Brownies like to adopt houses which they look after. They come out at night to finish small chores, look over the cattle. If there is a lazy servant in the home, he might choose to plague him for it. All Brownies expect in return is a bowl of cream or good milk and a honey cake. Never leave clothes and never leave too much food. They find this offensive and will leave. Care should be taken not to criticize their work.

Customarily they are said to inhabit houses or barns and aid in tasks around the house at night. Every manor house had its ùruisg, and in the kitchen, close by the fire was a seat, which was left unoccupied for him.

However, brownies do not like to be seen and will only work at night, perhaps in exchange for small gifts or food - cream, bread or milk may be left for him, but other gifts offend him. If clothes are left out for him, he will put them on and vanish, never to return. This is what happens in the Grimm story The Elves and the Shoemaker.

A mischievous brownie could sometimes disarrange rooms and furniture, and make an untidy clutter.

The brownies seldom discoursed with man, but they held frequent and affectionate converse with one another. They had general assemblies as well, usually held on a remote, rocky shore. In a certain district of the Scottish Highlands, Peallaidh an Spùit (Peallaidh of the Spout), Stochdail a’ Chùirt, and Brùnaidh an Easain (Brownie of the little waterfall) were names of note at those congresses.

The brownie had a particular fondness for the products of the dairy, and was a fearful intruder on milkmaids, who made regular libations of milk or cream to charm him off, or to procure his favour.

He could be seen supposedly only by those who had the second sight; yet I have heard of instances where he made himself visible to people not so gifted.

The house of a proprietor on the banks of the River Tay was even at the beginning of the twentieth century believed to have been haunted by this sprite, and a particular apartment therein has been for centuries called "Seòmar Bhrùnaidh" (Brownie’s room). When irritated through neglect or disrespectful treatment he would not hesitate to become wantonly mischievous. He was notwithstanding, rather gainly and good-natured rather that formidable. Though, on the whole, a lazy, lounging hobgoblin, he would often bestir himself on behalf of those who understood his humours, and suited themselves thereto. When in this mood, he was known to perform many arduous exploits in kitchen barn and stable, with marvellous precision and rapidity. These kind turns were done without bribe, fee or reward, for the offer of any one of these would banish him forever. Kind treatment was all he ever wished for, and it never failed to procure his favour.

In the islet of Cara, on the west of Cantyre, the old house, once belonging to the Macdonalds, was haunted by a Brownie that drank milk, made a terrific outcry when hurt, and disliked the Campbell race. In the old castle of Largie, on the opposite coast of Cantyre, which belonged to the same Macdonalds, there was also a Brownie, supposed to be the same as the Cara one. Since the modern house was built Brownie has not been seen or heard. In Cara he is still occasionally heard. It is not known exactly what he is like, no one having ever seen more than a glimpse of him. Before the arrival of strangers he put the house in order. He disliked anything dirty being left in the house for the night. Dirty bed-clothes were put out by him before morning. Dogs had to be put outside at night, as he often killed those left in the house. He was much addicted to giving slaps in the dark to those who soiled the house; and there are some still alive who can testify to receiving a slap that left their faces black. He tumbled on the floor water-stoups left full over-night. A man was lifted out of bed by him, and found himself `bare naked', on awakening, at the fire. A woman, going late in the evening for her cows, found Brownie had been before her, and tied them securely in the barn.

Brand in his description of Zetland observes:

“that not above forty or fifty years ago, every family had a brownie, or evil spirit, so called, which served them, to which they gave a sacrifice for his service; as when they churned their milk, they took a part thereof, and sprinkled every corner of the house with it, for Brownie’s use; likewise, when they brewed, they had a stone which they called ‘Brownie’s stane’, wherein there was a little hole into which they poured some wort for a sacrifice to Brownie. They also had some stacks of corn, which they called Brownie’s Stacks, which, though they were not bound with straw ropes, or in any way fenced as other stacks used to be, yet the greatest storm of wind was not able to blow away straw off them.”