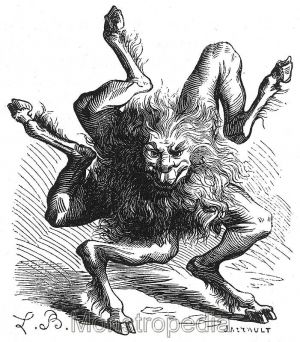 In Christian demonology, Buer is a Great President of Hell.

Although the etymology of his name is uncertain, curiously there was an ancient city named "Buer" (now Gelsenkirchen) in Westphalia, Germany.

Buer is a Great President of Hell and a demon of the second order who commands 50 legions.

Buaer appears with the head of a lion and five goat legs surrounding his body to walk or roll in every direction. Other traditions give him the shape of Sagittarius, which is as a centaur with a bow and arrows.

Buer appears when the Sun is in Sagittarius. He teaches Natural and Moral Philosophy, Logic, and the virtues of all herbs and plants. Buer also heals all infirmities, especially of men, and gives good familiars and servants.

Buer is a great president, and is seene in this signe; he absolutelie teacheth philosophie morall and naturall, and also logicke, and the vertue of herbes: he giveth the best familiars, he can heale all diseases, speciallie of men, and reigneth over fiftie legions. Pseudomonarchia daemonum - Johann Wier (1583)