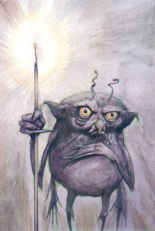 In Breton mythology, the Bugul Noz, is a fairy spirit who lives in the woodlands of Brittany.

The Bugul Noz is the last of his kind and to his despair, he is also ugly. His appearance is so awful that even wild animals avoid him, and he sometimes cries out to warn humans of his approach, so that he won't frighten them.

Though not malicious (indeed, rather kind and gentle), the Bugul Noz is always alone because of his hideous visage.