The bunyip is a mythical creature or a malevolent spirit from Australian mythology. Various accounts and explanations of bunyips have been given across Australia since the early days of the colonies. 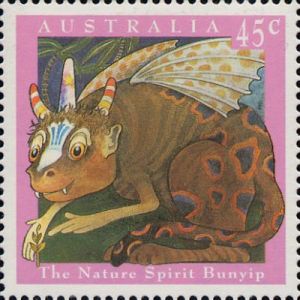 Usually translated as "devil" or "spirit". The word "bunyip" has also taken on the meaning of "imposter" in Australian English.

Aboriginal tribes do not all give the same visual description of the creature. Some say the bunyip looks like a huge snake with a beard and a mane; others say it looks like a huge furry half-human beast with a long neck and a head like a bird. Common features in Aboriginal drawings include a horse-like tail, flippers, and walrus-like tusks or horns. The Aborigine's fear of Bunyip can probably be traced back to a known aquatic man-killer, the saltwater crocodile. The bunyip has a loud bellowing cry terrifies the aborigines.

The settler's view of the Bunyip varies greatly from that of the Aborigines but they also reported different set of creatures. The more common of the two has a dog-like face and a long shaggy coat. The second and more rare of the Bunyips is the reported to have a long maned neck, as well as a shaggy coat. Recently, the bunyip is shown as a peaceful vegetarian grazing hippo-like creature.

Like other beasts in Dreamtime, the Bunyip was malevolent towards human beings. At night the Bunyip was said to go and prey upon women and children. Because the Bunyip was such a threat to the Aborigines of the time whenever its terrifying bellowing cry was heard Aborigines steered clear of any water sources.

According to legend, they are said to lurk in swamps, billabongs, creeks, riverbeds, and waterholes. At night their blood-curdling cries can be heard as they devour any animal that ventures near their abodes.

"It was about as big as a six months' old calf, of a dark brown colour, a long neck, and long pointed head; it had large ears which pricked up when it perceived him (the herdsmen); had a thick :mane of hair from the head down the neck, and two large tusks. He turned to run away, and this creature equally alarmed ran off too, and from glance he took at it he describes it as having an :awkward shambling gallop; the forequarters of the animal were very large in proportion to the hindquarters, and it had a large tail."

He took two men to the place next morning to look for its track, which they described as broad and square, :somewhat like what the spread hand of a man would make in soft muddy ground.