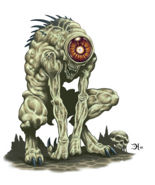 In Philippine folklore, Bungisngis is a one-eyed giant who lives in Meluz, Orion, Bataan.

Bungisngis is derived from a Tagalog term ngisi that literally means to goggle. It is also commonly known as Mahentoy in the northern part of Davao.

Bungisngis is pictured as one-eyed giant who laughs often. It takes a humanoid form and displays its large teeth all the time. Its two long tusks protrude on the side of its mouth. The eye of the giant is located at the center of its forehead.

The Bungisngis is gifted with a strong sense of hearing and extraordinary strength.

According to the Filipino tale, “The Three Friends - The Monkey, The Dog and The Carabao”, Bungisngis cam throw the carabao that ended up knee-deep in the ground. But, despite from its strength, it can be deceived easily and quickly succumb to panics. At the end of the tale, Monkey tricked him that led to his death.