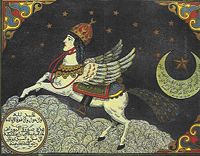 A Buraq seen on an reproduction of a 17th century Indian Mughal miniature.

Al-Burāq (Arabic: البُراق‎ al-Burāq "lightning") is a creature from the heavens which transported the prophets.

An excerpt from a translation of Sahih al-Bukhari describes a buraq:

I was brought by the Buraq, which is an animal white and long, larger than a donkey but smaller than a mule, who would place its hoof at a distance equal to the range of vision.

Then he [Gabriel] brought the Buraq, handsome-faced and bridled, a tall, white beast, bigger than the donkey but smaller than the mule. He could place his hooves at the farthest boundary of his gaze. He had long ears. Whenever he faced a mountain his hind legs would extend, and whenever he went downhill his front legs would extend. He had two wings on his thighs which lent strength to his legs.

He bucked when Muhammad came to mount him. The angel Jibril (Gabriel) put his hand on his mane and said: "Are you not ashamed, O Buraq? By Allah, no-one has ridden you in all creation more dear to Allah than he is." Hearing this he was so ashamed that he sweated until he became soaked, and he stood still so that the Prophet mounted him.

The most commonly told story is how in the 7th century, the Buraq carried the Islamic prophet Muhammad from Mecca to Jerusalem and back during the Isra and Mi'raj or "Night Journey", which is the title of one of the chapters (sura), Al-Isra, of the Qur'an. 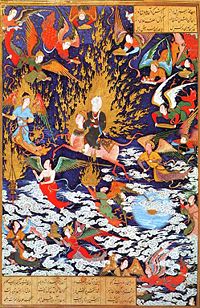 The journey to the Seventh Heaven.

According to Islam, the Night Journey took place 12 years after Muhammad became a prophet, during the 7th century. Muhammad had been in his home city of Mecca, at his cousin's home (the house of Ummu Hani' binti Abu Thalib) in Isha'a prayer. Afterwards, Muhammad went to the Masjid al-Haram. While he was resting at the Kaaba, the angel Jibril (Gabriel) appeared to him followed by the Buraq. Muhammad mounted the beast, and in the company of Gabriel, they traveled to the "farthest mosque". The location of this mosque was not explicitly stated, but is generally accepted to mean Al-Aqsa Mosque (Temple Mount) in Jerusalem. At this location, Muhammad dismounted from the Buraq, prayed, and then once again mounted the Buraq and was taken to the various heavens, to meet first the earlier prophets and then God. Muhammad was instructed to tell his followers that they were to offer prayers 50 times per day. However, at the urging of Moses (Musa), Muhammad returns to God and it was eventually reduced to 10 times, and then 5 times per day as this was the destiny of Muhammad and his people. The Buraq then transported Muhammad back to Mecca.

The Buraq was also said to transport Abraham (Ibrahim) when he visited his wife Hagar and son Ishmael. According to tradition, Abraham lived with one wife in Syria, but the Buraq would transport him in the morning to Mecca to see his family there, and take him back in the evening to his Syrian wife.