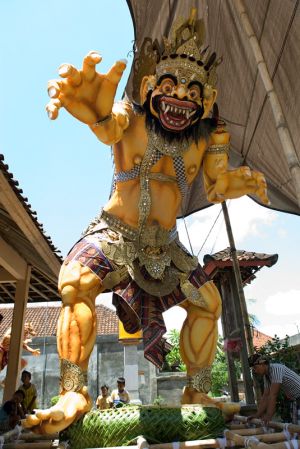 An Ogoh ogoh monster during the Nyepi celebration in Bali (Indonesia)

Buta Kala are demons or malevolent spirits in Balinese mythology.

They are usually portrayed as monstrous, with missing or excessive body parts, animal features and the usual fangs, bulging eyes and potbellies.

Buta-kala are considered as the immediate cause of all that is injurious to human joy and comfort, physical and mental, natural and social. Wars, epidemics, catastrophes, arguments, anger, confusion, greed, sadness and other disturbances are signs of their presence.

The buta-kala are everywhere but their absence is felt mainly when the gods are distant or when human neglect or wrongdoing has alienated the Divinity.

Buta-kala are also considered as the angry forms of divinities when they feel neglected or forgotten. They may also serve the gods and carry out their orders.

They can also help humans to achieve important goals and part of the Balinese magic is devoted to offerings to buta-kala.

Ogoh Ogoh monsters are colourful monster sculptures in the form of creatures of the underworld known in Balinese as buta-kala. They are made from bamboo frames and paper maché and are mainly built by the youngsters of the villages and kampungs in the weeks and months before Melasti and Nyepi.

On the day preceding Nyepi, the Hindu new year, all traffic is blocked and the Ogoh-Ogoh monsters are paraded around near the main intersections and finally burned in the evening to drive away evil spirits.