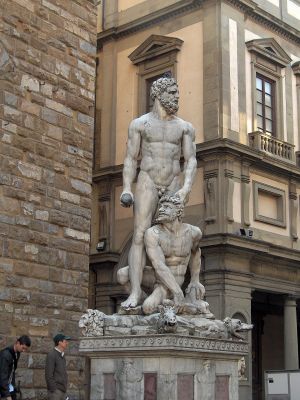 In Greek mythology, Cacus was a fire-breathing monster and the son of Vulcan. It lived in a cave in the Aventine Hill in Italy, the future site of Rome. To the horror of nearby inhabitants, Cacus fed on human flesh and would nail the heads of victims to the doors of his cave. He was eventually overcome by Heracles.

According to Evander, Heracles stopped to pasture the cattle he had stolen from Geryon near Cacus' lair. As Heracles slept, the monster took a liking to the cattle and slyly stole eight of them - four bulls and four cows - by dragging them by their tails, so as to leave no trail. When Heracles awoke and made to leave, the remaining herd made plaintive noises towards the cave, and a single cow lowed in reply.

Angered, Heracles stormed towards the cave. A terrified Cacus blocked the entrance with a vast, immoveable boulder, forcing Heracles to tear at the top of the mountain to reach his adversary. Cacus attacked Heracles by spewing fire and smoke, while Heracles responded with tree branches and rocks the size of millstones. Eventually losing patience, Heracles leapt into the cave, aiming for the area where the smoke was heaviest. Heracles grabbed Cacus and strangled the monster, and was lauded throughout the land for his act.

Another version of the myth states that Cacus made the cattle walk backwards so they left no trail. Heracles drove his remaining cattle past a cave, where Cacus was hiding the stolen ones, and they began calling out to each other. Alternatively, Caca, Cacus' sister, told Heracles where he was.

In ancient Roman mythology, Cacus ("bad") was a fire god. He was later demoted to the giant described above. According to the Romans, after Hercules (the Roman Heracles) killed Cacus, he founded an altar, the Ara Maxima, where later the Forum Boarium, the cattle market of Rome, was held. Rome erected temples to Hercules in the area, including the still extant Temple of Hercules Victor. It is believed that a large stone in the nearby church of Santa Maria in Cosmedin is what is left of the Ara Maxima.

The monster Cacus, more than half a beast,
This hold, impervious to the sun, possess'd.
The pavement ever foul with human gore;
Heads, and their mangled members, hung the door.
Vulcan this plague begot; and, like his sire,
Black clouds he belch'd, and flakes of livid fire.
Time, long expected, eas'd us of our load,
And brought the needful presence of a god.
Th' avenging force of Hercules, from Spain,
Arriv'd in triumph, from Geryon slain:
Thrice liv'd the giant, and thrice liv'd in vain.
His prize, the lowing herds, Alcides drove
Near Tiber's bank, to graze the shady grove.
Allur'd with hope of plunder, and intent
By force to rob, by fraud to circumvent,
The brutal Cacus, as by chance they stray'd,
Four oxen thence, and four fair kine convey'd;
And, lest the printed footsteps might be seen,
He dragg'd 'em backwards to his rocky den.
The tracks averse a lying notice gave,
And led the searcher backward from the cave.
- The Aeneid, Book VIII