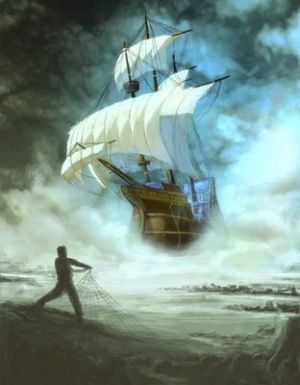 The Caleuche is a mythical ghost ship of the Chilote mythology and local folklore of the Chiloé Island, in Chile.

The Dutch pirate ship Calanche captained by Vicente Vaneucht once troubled these waters.

According to legend, the Caleuche is a large phantom ship sailing the seas around Chiloé at night with fog. It usually appears as a beautiful and bright sailing ship, always full of lights and with the sounds of a party onboard, but quickly disappears to resurface at great distances.

The Caleuche's crew is composed by two kind of sailors: the drowned, who are brought to the ship by three Chilote mythological figures, two sisters: the sirena chilota (a type of mermaid) and the Pincoya and their brother the Pincoy and witches (brujo chilote) who usually join the party over the back of the caballo marino.

It is said that the ship possesses the power to transform unfortunates into animals or inert objects such as a tree-trunk with a crew of seals.

The caleuche is a grotesque and watery adaptation of the medieval wild hunt, probably brought by the Spaniards.

In Alastair Reynolds's Chasm City, Caleuche is the name given to a ship trailing behind a flotilla of colony ships that is not supposed to be there and never responds to communication attempts. When the protagonist takes a shuttle to visit the ghost ship he discovers that it is really a space-faring alien creature that has assumed the appearance of one of the flotilla ships and is trying to hide amongst them from its own enemy.