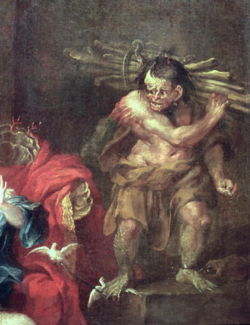 Caliban is a fictional character in Shakespeare's The Tempest, a deformed monster who is the slave of Prospero.

More obviously, the name "Caliban" is a close anagram of "cannibal". It may also be related to "bruneteau" and "Carib". Calibaun is a Romany word for black.

While he is referred to as a mooncalf, a freckled whelp, he is the only human inhabitant of an island that is otherwise "not honored with a human form." In some traditions he is depicted as a wild man, or a beast man, or sometimes a mix of fish and man, stemming from the confusion of two of the characters about what he is, found lying on a beach.

Trinculo: What have we here? a man or a fish? dead or alive? a fish: he smells like a fish; a very ancient and fish-like smell; a kind of, not of the newest Poor-John. a strange fish! Were I in England now, as once I was, and had but this fish painted, not a holiday fool there but would give a piece of silver: there would this monster make a man: when they will not give a doit to relieve a lame beggar, they will lay out ten to see a dead Indian. legg'd like a man! and his fins like arms! Warm o' my troth! I do now let loose my opinion, hold it no longer: this is no fish, but an islander, that hath lately suffered by a thunderbolt...-Act II, Scene 2

Caliban is the son of the witch Sycorax by (according to Prospero) a devil.

Banished from Algiers, Sycorax was left on the isle, pregnant with Caliban, and died before Prospero's arrival. Caliban refers to Setebos as his mother's god. Prospero explains his harsh treatment of Caliban by claiming that after initially befriending him, Caliban attempted to rape Miranda. Caliban confirms this gleefully, saying that if he hadn't have been stopped he would have peopled the island with a race of calibans. Prospero enslaves Caliban and torments him then. In his resentment against Prospero, Caliban takes Stephano, one of the shipwrecked servants, as a god and as his new master, after being given some of Stephano's wine. Caliban urges Stephano to kill Prospero and become lord of the island. Caliban learns that Stephano is neither a god nor Prospero's equal in the conclusion of the play, however, and Caliban agrees to obey Prospero again.

Although referred to by Prospero as a brutal savage and treated as a figure of fun and contempt by all of the other characters, it is significant that Caliban is given some of the most moving and eloquent speeches in the play:

Be not afeard; the isle is full of noises,


Sounds and sweet airs, that give delight and hurt not.
Sometimes a thousand twangling instruments
Will hum about mine ears, and sometime voices
That, if I then had waked after long sleep,
Will make me sleep again: and then, in dreaming,
The clouds methought would open and show riches
Ready to drop upon me; that, when I waked,
I cried to dream again.

Other interpretations and references

Caliban was originally mostly a comic figure; however, in later years, he became a symbol for the wild, natural man. And, in more recent times, Caliban has been used as a metaphor for colonialism by various postcolonial intellectuals. However, the fact that, in Shakespeare’s original, neither Caliban nor Sycorax are native to the island, but in fact came to be exiled there in much the same way as Prospero and Miranda, is often overlooked in this view.

The most well known example of this postcolonial interpretation of the character is the play "Une Tempete" by Négritude poet Aimé Césaire. In this version, Caliban rejects Prospero's offer to return to his master's service; and the play ends with Prospero's eventual defeat and seclusion to the Island, away from the family and friends that left him.

"The nineteenth century dislike of realism is the rage of Caliban seeing his own face in a glass.

"Caliban" is also a term used for a half human, half demon creature and is the name of the main character in Rob Thurman's book, Nightlife who is half human and half Auphe.