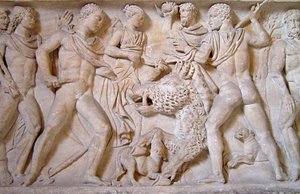 The Calydonian Boar is one of a genre of chthonic monsters in Greek mythology, each set in a specific locale, which must be overcome by heroes of the Olympian age.

Sent by Artemis to ravage the region of Calydon in Aetolia, it met its end in the Calydonian Hunt, in which all the heroes of the new age pressed to take part, with the exception of Heracles, who vanquished his Goddess-sent boar separately.

Since the mythic event drew together many heroes (Bibliotheke1.8.2) ;the Calydonian Boarhunt offered a natural subject in classical art, for it was redolent with the web of myth that gathered around its protagonists on other occasions, around their half-divine descent and their offspring. Like the quest for the Golden Fleece (Argonautica) or the War of Troy that took place the following generation, the Calydonian Hunt is one of the nodes in which much Greek myth comes together.

Nevertheless, though both Homer and Hesiod were aware of the details of this myth, no surviving poet seems to have worked the pieces into a single Epic epic, to become the classic telling: instead the myth repertory called Bibliotheke ("The Library") contains the gist of the tale, which the Roman poet Ovid took up with some colorful detail.

King Oeneus ("wine man") of Calydon, an ancient city of west-central Greece north of the Gulf of Patras, held annual sacrifices to the gods. One year the king forgot to include the Great Artemis in his offerings (Iliad ix.933). Insulted, Artemis loosed the biggest, most ferocious boar imaginable on the countryside of Calydon. It rampaged throughout the countryside, destroying vinyards and crops, forcing people to take refuge inside the city walls, (Ovid) where they began to starve.

Oeneus sent messengers out to look for the best hunters in Greece, offering them the boar's pelt and tusks as a prize.

Among those who responded were some of the Argonauts, Oeneus' own son Meleager, and, remarkably for the Hunt's eventual success, one woman— the huntress Atalanta, the "indomitable", who had been suckled by Artemis as a she-bear and raised as a huntress, a proxy for Artemis herself (Kerenyi; Ruck and Staples). Divided in her motives, Artemis it was also said had sent the young huntress because she knew her presence would be a source of division, and so it was: many of the men, led by Kepheus and Ankaios refused to hunt alongside a woman. It was the smitten Meleagros who convinced them. Nonetheless it was Atalanta who first succeeded in wounding the boar with an arrow, although Meleager finished it off, and offered the prize to Atalanta, who had drawn first blood. "But the sons of Thestios, who considered it disgraceful that a woman should get the trophy where men were involved, took the skin from her, saying that it was properly theirs by right of birth, if Meleagros chose not to accept it. Outraged by this, "He had honoured a stranger woman above them and set kinship aside," Diodorus of Sicily noted. Meleagros slew the sons of Thestios and again gave the skin to Atalanta (Bibliotheke). Meleager's mother, sister of Meleager's slain uncles, took the fatal brand from the chest where she had kept it (see Meleager) and threw it once more on the fire; as it was consumed, Meleager died on the spot, as the Fates had foretold. Thus Artemis achieved her revenge against King Oeneus.

During the hunt, Peleus accidentally killed his host Eurytion. In the course of the hunt and its aftermath, many of the hunters turned upon one another, contesting the spoils, and so the Goddess continued to be revenged (Kerenyi, 114): "But the goddess again made a great stir of anger and crying battle, over the head of the boar and the bristling boar’s hide, between Kouretes and the high-hearted Aitolians" (Homer, Iliad, ix.543).

The boar's hide that was preserved in the Athena Alae at Tegea in Laconia was reputedly that of the Calydonian Boar, "rotted by age and by now altogether without bristles" by the time Pausanias (geographer)|Pausanias saw it in the second century CE (Description of Greece viii.47.2). The Calydonian Hunt was the theme of the temples' main pediment.

The heroes who participated assembled from all over Hellas. On the Temple of Athena at Tegea, Pausanias saw the figures that are marked T. The Latin mythographer Gaius Julius Hyginus|Hyginus (Fabulae 30) lists those marked H; they include Deucalion, whose connection is unlikely. The heroes noted in Ovid's list are marked O

Part of this article consists of modified text from Wikipedia, and the article is therefore licensed under GFDL.
Retrieved from "https://www.monstropedia.org/index.php?title=Calydonian_Boar&oldid=9485"
Categories: