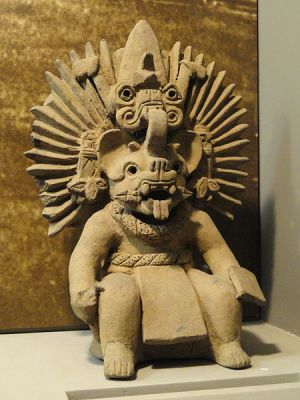 Camazotz is a bat god that dwells in caves and is fiercely dangerous to anyone that comes across it. The appearance of Camazotz is terrifying, and in many depictions he is anthropomorphized with the head of a bat and the body of a man.

The story of Camazotz was first mentioned in 100 AD as part of a cult of a Zapotec tribe in Oaxaca, Mexico, though it’s possible that the myth has been around for much longer as there is evidence of the Zapotec people existing as far back as 700 BC.

The K’iche’ people are a group of Indigenous peoples of the Americas who make up around 11% of the population of Guatemala. They have a rich history steeped in Maya mythology, and they were one of the most powerful states in the area in the pre-Conquest era. The main city of the K’iche’ people was Q’umarkaj, which is an important Mesoamerican archaeological site in the present day.

For Mesomarican mythology, Camazotz represents a number of things including death, nighttime, and sacrifice. Caves were culturally important to the Zapotec tribes of Oaxaca as they represented a gateway to the underworld. The fact that many bat species lived in caves meant that they were associated with the underworld as a result. Camazotz was likely modelled on a vampire bat, but some believe that it could have been modelled on a larger, leaf-nosed bat that used to live in the caves before becoming extinct.

In 1988, a fossil of a vampire bat was discovered in the Mongas province of Venezuela. The bat was larger than the modern vampire bat by 25% and was dubbed Desmodus Draculae. It is more popularly known as the giant vampire bat.

Sites containing examples of it have been found in the Yucatan, Belize, northern Brazil, and Venezuela. In 2000, a tooth from D. Draculae was found in Argentina - much farther south of the modern range of the Desmodus genus. It is difficult to date exactly when D. Draculae went extinct, or if it went extinct at all. All of the sites have been dated so far to between the Late Pleistocene and Late Holocene.

Perhaps the most famous appearance of Camazotz in Maya mythology is in the Popol Vuh, a body of text that documents the K’iche’ people of the Guatemalan Highlands. The Popol Vuh tells of the K’iche’ creation story and translates as the ‘The Book of the People’ in the K’iche’ language.

In the Popol Vuh, Camazotz are the bat-like monsters encountered by the Maya Hero Twins Hunahpu and Xbalanque during their trials in the underworld of Xibalba. Zotzilaha was the name of the House of Bats in the underworld where the hero twins were forced to spend the night by the lords of Xibalba. The legend is that the hero twins slept inside their blowguns as protection from the bats (referred to as Camazotz). However, when the bats went silent, Xbalanqué asked Hunahpú to check if dawn had come and Hunahpú did so by poking his head out of the tube. But, in fact, it was not yet dawn and one of the bats took the opportunity to swoop down and rip away Hunahpú’s head, leaving him decapitated. Xbalanqué was left inside the tube, questioning what his brother was seeing and why he had gone so still without receiving any answers. The bats then took the head of Hunahpú to the ball court of the Xibalba lords to be gruesomely displayed. Little did they know, though, that the Maya Hero Twins had devised a plan to replace Hunahpu’s head with a gourd, and in doing so deceived the Xibalbans and left them with the embarrassment of a humiliating defeat. Later in the Popol Vuh, a messenger from the underworld in the form of a humanoid bat (believed to be Camazotz) appears to broker a deal between humanity and Lord Tohil, the patron god of the K’iche’. In this deal, mankind promised their armpits and their waists in exchange for fire which is how the ritual of cutting open a person’s breast in sacrifice came to be. Some myths claim that, during the day, Camazotz would turn into a stone statue and therefore could only move at night, but this has not been confirmed.