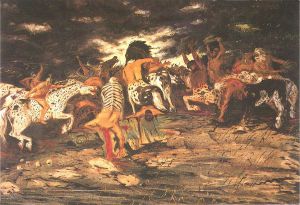 detail of centaur, mosaic 118-138 AD from Hadrians villa near Tivoli.jpg

The centaurs of Greek mythology are part human and part horse. They are usually with the torso and head of a human, and the body of a horse. Centaurs are the followers of the wine god Dionysus and are well known for drunkenness and carrying off helpless young maidens.

In medieval romances, the centaurs were called "Sagittary."

The Greek word kentauros could be etymologized as ken - tauros = "piercing bull". Another possible etymology can be "bulls slayer". Some say that the Greeks took the constellation of Centaurus, and also its name "piercing bull", from Mesopotamia, where it symbolized the god Baal who represents rain and fertility, fighting with and piercing with his horns the demon Mot who represents the summer drought. (In Greece, Mot became the constellation of Lupus.) Later in Greece, the constellation of Centaurus was reinterpreted as a man riding a horse, and linked to legends of Greece being invaded by tribes of horsemen from the north. The idea of a combined monster may have arisen as an attempt to fit the pictorial figure to the stars better.

Alexander Hislop in his book The Two Babylons theorized that the word is derived from the Semitic Kohen and Torah phonetic shift the less prominent consonants being lost over time ,with it developing into Khen Tor or Ken-Tor, and being transliterated phonetically into Ionian as Kentaur .

The centaur is a mythological creature. Its head, arms, and chest are those of a human and the rest of its body, including four legs, hindquarters, and a tail is like that of a horse.

There are also deer-centaurs, dog-centaurs, and the Gaelic androcephalous or man-headed horse. Both Greeks and Etruscans sometimes painted a centaur-like animal with the entire body of a human rather awkwardly attached in various ways to the lower or back parts of a horse.

In early Attic vase-paintings centaurs were represented as human beings in front, with the body and hind legs of a horse attached to the back. The depiction of centaurs on painted vases changed after the Archaic period: from the sixth century BCE onwards, centaurs were depicted with a horse's body and a human torso joined at the waist to the horse's withers where the horse's neck would be.

Presence and illustrations of centaurs date back to Assyria (2000 BC) and India (3000 BC). Some have traced the Greek centaur origins back to the Gandharvas who in Vedic mythology drove the horses from the Sun but it is now accepted that they were a primitive and rough population of horsed shepherds from Thessalony.

According to Greek tradition, there are two families of centaurs. The more numerous and unruly centaurs are those born of the union of Ixion, King of the Lapithae and a cloud which Zeus disguised as his own wife, Hera, whom Ixion had bragged of having relations with. Therefore, the Centaurs are sometimes called Ixionidae.

Chiron who was the like the above centaurs in appearance only fathered a different race of centaurs, sober, learned and studious. His father was Cronus, the Titan and his mother was Philyra, an Oceanid (or ocean nymph). He was a famous physician and teacher and was renowned for his skill in hunting, medicine, music, and the art of prophecy. Taught by Apollo and Diana, Chiron went on to tutor the greatest Greek warriors, Aesculapius, Jason, Hercules, and Achilles.

Centaurs were a plague to the people around them. They went about drunk, eating raw flesh, trampling crops, and raping female humans. The intellectual parts they inherited from humankind left them ignorant and yet cunning. Two exceptions to this rule were Pholus and Chiron.

The Centaurs were creatures that were sometimes very hostile towards humans. They were always involved in brawls and battles. Often Zeus would send the Centaurs to punish gods and humans who had offended him.

The hostility between man and Centaurs is said to have originated when the Centaurs were invited to their stepbrother's (Pirithous), wedding celebration. At the feast Eurytion, one of the Centaurs, becoming intoxicated with the wine, attempted to offer violence to the bride; the other Centaurs followed his example, and a dreadful conflict arose in which several of them were slain. This is the celebrated battle of the Lapithae and Centaurs, a favorite subject with the sculptors and poets of antiquity.

They lived in herds on Mt. Pelion in Thessaly, Greece.

Zeus purified Ixion of a first murder of kin, a horrifying deed. The shameless man repaid this honor by trying to seduce Hera. The goddess told her husband. When Zeus learned about this passion he made a disguised model of Hera, a cloud likeness, to see how obsessed he was with his wife. Ixion was so deeply in love with Hera that he slept with the disguised model. Zeus punished Ixion by chaining him to a winged and fiery wheel, which revolved forever in Tartarus. The cloud gave birth to a creature named Centaurus. It was Centaurus that descended upon a herd of Magnesian mares and conceived the Centaurs. The Centaurs had the bodies of horses, and the upper torsos of men.

During the Battle of the Lapithae and the Centaurs, Chiron fought for the Lapithae and was accidentally wounded by one of Hercules' poisoned arrows. To avoid a life of unending pain from this arrow's poison, Chiron gave his immortality to Prometheus and died. Zeus set his remains in the night sky where he appears as Sagittarius, the archer.

Nessus first proposed Hercules and his second wife Deianeira to carry them over the river Evenus but when Nessus was alone with Deianiara on the other side, he tried to abuse from her. Hercules shot Nessus with one of his poisoned arrow. The dying Centaur told Deianeira to use his blood as a "love potion"on Hercules if sometime in the future he ever fell out of love with her. One day, Hercules sent was of his fellow Lichas to get a white tunic at his house. Deianeira who suspected Hercules was with a rival, Iole, spilled some blood on the garment. As soon as Hercules put the garment on his skin, he felt like his body was burning. The pain was so intense and he eventually died from the wound (Zeus took him away before he immolated himself).

The most common theory holds that the idea of centaurs came from the first reaction of a non-riding culture, as in the Minoan civilization, to nomads who were mounted on horses. The theory goes that such riders would appear as half-man, half-animal. (Bernal Díaz del Castillo reported that the Aztecs had this misapprehension about Spanish cavalrymen.) <ref>Stuart Chase, Mexico: A Study of Two Americas, Chapter IV (University of Virginia Hypertext), accessed 24 April 2006.</ref> Horse taming and horseback culture evolved first in the southern steppe grasslands of Central Asia, perhaps approximately in modern Kazakhstan.

Of the various Classical Greek authors who mentioned centaurs, Pindar was the first who describes undoubtedly a combined monster. Previous authors (Homer etc) only use words that could also mean ordinary men riding ordinary horses.

The armchair anthropologist and writer Robert Graves speculated that the Centaurs of Greek myth were a dimly-remembered, pre-Hellenic fraternal earth cult who had the horse as a totem. A similar theory was incorporated into Mary Renault's The Bull from the Sea.

The wicked centaurs are the antithesis of the knight and the horseman. Instead of mastering or taming their instincts, these centaurs are ruled by them. They symbolize violent lust, adultery, brutality, vengefulness, heretics, and the Devil. They represent the struggle within each heart between good and evil, moderation and excess, passion and propriety, forgiveness and retaliation, belief and unbelief, god and beast.

Centaurs may be seen in pictures of St. Anthony Abbot who met both a centaur and a satyr when searching for St. Paul the Hermit in the desert. According to some legends, this centaur was the Devil himself.

Chiron is known as the wisest of all Centaurs. He did not depict the regular character of a Centaur; he just had the same body of those creatures. To the Greeks he was a close representation of a saint. He was a father figure to many of the gods' children. They were given to him so he could teach them great knowledge of the world. Chiron represents the positive combination of man's animal and spiritual natures. As early Christians strove to modernize ancient pagan symbolism with Church teaching, the combination of the spiritual and the animal natures in the centaur-archer caused this image of Apollo and the sun to become a representation of Christ, the God-Man.

Centaurs have appeared many times and in many places in modern times, in for example Artemis Fowl, Avatar's Perdition: Black Sword Chronicle, Fantasia, the Narnia books (as well as in the movie adaptation of its second novel, The Chronicles of Narnia: The Lion, the Witch and the Wardrobe), Hercules: The Legendary Journeys, 'The Golden Voyage of Sinbad, Xena: Warrior Princess, Harry Potter, Class of the Titans and the trilogy Titan, Wizard, Mortal Kombat, Demon (novel) and they also featured prominently in the Xanth series.

The University of Tennessee Hodges hosts a permanent exhibit of a "Centaur from Volos", in its library. The exhibit, made by combining a study human skeleton with the skeleton of a Shetland pony is entitled "Do you believe in Centaurs?" and was meant to mislead students in order to make them more critically aware, according to the exhibitors.<ref>Template:Cite journal</ref>

In the Mortal Kombat series of fighting games, Motaro, one of the most infamous sub bosses of the first three games is a centaur.

Centaur is Monster in My Pocket #76.

In Age of Mythology the centaur is a classical age myth unit.

Although not as a flesh-and-blood Centaur, the Robot Master Centaur Man from Mega Man 6 is modeled to look like a Centaur.

In the Shining Force series, Centaurs are often portrayed as the knights of most kingdoms.

In fantasy novels the view of centaurs has sometimes been changed from barbarism to an honorable race that practices breeding and other actions relative to that of animals. This has also been done in some of the Magic: The Gathering cards that represent centaurs. In the real-time strategy PC game, Warcraft III: Reign of Chaos and the MMORPG, World of Warcraft, the Centaur are portrayed as a barbaric warrior race.

Though the Greek word kentauros is said to be composed of a single morpheme; perhaps not a Greek one in its origin, a suffix -taur has been invented by writers and game designers in the late 20th century for fantasy animal-human hybrids. For more information, see Taur.

Other hybrid creatures appear in Greek mythology, always with some liminal connection that links Hellenic culture with archaic or non-Hellenic cultures:

Part of this article consists of modified text from Wikipedia, and the article is therefore licensed under GFDL.
Retrieved from "https://www.monstropedia.org/index.php?title=Centaur&oldid=9420"
Categories: