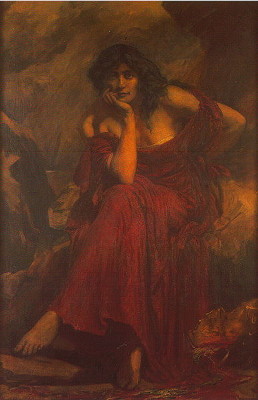 In Welsh medieval legend, Ceridwen was an enchantress, who was said to possess the cauldron of Poetic Inspiration (Awen).

Her husband was Tegid Foel, and they lived near Bala Lake (Llyn Tegid) in north Wales. Like many Celtic goddesses, she had two children representing dark and light aspects emerging from the One Goddess her daughter Crearwy being light and beautiful, and her son Afagddu being dark and ugly.

Cerridwen is keeper of the Cauldron of the Underworld, in which inspiration and divine knowledge are brewed. She appears as the crone, or goddess of dark prophetic powers.

According to the late medieval Tale of Taliesin, included in some modern editions of the Mabinogion, Morfran (also called Afagddu) was hideously ugly, so Ceridwen sought to make him wise. She had a magical cauldron that could make a potion granting the gift of wisdom and poetic inspiration. The mixture had to be boiled for a year and a day. Morda, a blind man, tended the fire beneath the cauldron, while Gwion Bach, a young boy, stirred the concoction. The first three drops of liquid from this cauldron gave wisdom; the rest was a fatal poison. Three hot drops spilled onto Gwion's thumb as he stirred, burning him. He instinctively put his thumb in his mouth, and instantly gained great wisdom and knowledge.

Ceridwen chased Gwion. The goddess then pursues Gwion through a cycle of changing shapes, which correspond both to totem animals and to the turning of the seasons; this theme is related to that of Mabon and Merlin, in which a divine youth is associated with the orders and creatures of Creation. He turned himself into a hare. She became a greyhound. He became a fish and jumped into a river. She turned into an otter. He turned into a bird; she became a hawk. Finally, he turned into a single grain of corn. She then became a hen and ate him. When Ceridwen became pregnant, she knew it was Gwion and resolved to kill the child when he was born. However, when he was born, he was so beautiful that she couldn't do it. She threw him in the ocean instead, sewing him inside a leather-skin bag. The child did not die, but was rescued on a Welsh shore - near Aberdyfi according to most versions of the tale - by a prince named Elffin ap Gwyddno; the reborn infant grew to became the legendary bard Taliesin.

This story is similar to a tale told about the Irish hero, Finn mac Cumhal, and may enshrine a Celtic divinatory practice involving thumb chewing. This practice was known in early Ireland as Imbas Forosnai and seems to have rested on the notion that chewing the raw flesh of the thumb imparted sagacity.