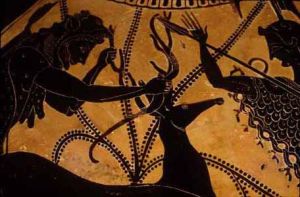 The Ceryneian Hind, also called Cerynitis, was an enormous deer sacred to Artemis, the chaste goddess of the hunt and moon. It had golden antlers like a stag and hooves of bronze or brass, and it was said that it could outrun an arrow in flight. The capture of the hind was one of The Twelve Labours of Heracles.

When Artemis was a child, she found five gigantic hinds grazing in Thessaly and captured four of them to draw her chariot. The fifth escaped across a river to Mt. Cerynaea, on the border of Achaea and Arcadia.

The Third Labour of Heracles

Eurystheus was greatly angered to find that Heracles had managed to escape death on the previous two labours, and so decided to spend more time thinking up a third task that would spell doom for the hero. The third task did not involve killing a beast, as it had already been established that Heracles could overcome even the most fearsome opponents, so Eurystheus decided to make him capture the remaining Cerynian Hind.

The hind was so fast it could outrun an arrow. When Heracles awoke from sleeping, he could see the hind from the glint on its antlers. Heracles chased the hind on foot for a full year through Greece, Thrace, Istria and the land of the Hyperboreans. In some versions, he captured the hind when it stopped to drink, rendering it lame by shooting it with an arrow that had not been poisoned with centaur/Lernaean Hydra blood, as most of his arrows were, in other versions he captured it when it was unable to run any further.

Eurystheus had given Heracles this task hoping to incite Artemis anger at Heracles for his desecration of her sacred animal. As he was returning with the hind, Heracles encountered Artemis and her twin, Apollo (god)|Apollo. He begged the goddess for forgiveness, explaining that he had to catch it as part of his penance, but he promised to return it. Artemis forgave him, foiling Eurystheus' plan to have her punish him.

Upon bringing the hind to Eurystheus, he was told that it was to become part of the King's menagerie. Heracles knew that he had to return the hind as he had promised, so he agreed to hand it over on the condition that Eurystheus himself came out and took it from him. The King came out, but the moment Heracles let the hind go, it sprinted back to her mistress, and Heracles left saying that Eurystheus had not been quick enough.

Origin of the myth

A doe bearing antlers was unknown in Greece, but the story of the hind is suggestive of reindeer, which, unlike other deer, can be harnessed and whose females bear antlers; so the myth's archaic origins may have been northern, Robert Graves thought.

Part of this article consists of modified text from Wikipedia, and the article is therefore licensed under GFDL.
Retrieved from "https://www.monstropedia.org/index.php?title=Ceryneian_Hind&oldid=9373"
Categories: