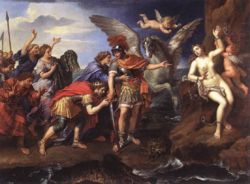 Cetus was a sea-monster sent by Poseidon to ravage Aithiopia but eventually slain by Perseus. It is also the name of a constellation.

Cassiopeia boasted of her daughter Andromeda's beauty, and said that she surpassed the Nereids. The latter prevailed on Poseidon to visit the country by an inundation, and a sea-monster was sent into the land. The oracle of Ammon promised that the people should be delivered from these calamities, if Andromeda was given up to the monster; and Cepheus, being obliged to yield to the wishes of his people, chained Andromeda to a rock. Here she was found and saved by Perseus, who slew the monster and obtained her as his wife. (Apollod. ii. 4. § 3 ; Hygin. Fab. 64; Ov. Met. iv. 663, &c.) Athena placed her among the stars, in the form of a maiden with her arms stretched out and chained to a rock, to commemorate her delivery by Perseus. (Hygin. Poet. Astr. ii. 10, &c.; Eratosth. Catast. 17; Arat. Phaen. 198.) Conon (Narrat. 40) gives a wretched attempt at an historical interpretation of this mythus. The scene where Andromeda was fastened to the rock is placed by some of the ancients in the neighbourhood of Iope in Phoenicia, while others assign to it a place of the same name in Aethiopia. The tragic poets often made the story of Andromeda the subject of dramas, which are now lost. The moment in which she is relieved from the rock by Perseus is represented in an anaglyph still extant. (Les plus beaux Monumens de Rome, No. 63.)

Source: Dictionary of Greek and Roman Biography and Mythology.

Arriving in Aithiopia, which Kepheus ruled, Perseus came upon his daughter Andromeda laid out as a meal for a Ketos. It seems that the king's wife Kassiepeia had challenged the Nereides in :beauty, boasting that she outdid them all. As a result the Nereides were in a rage, and Poseidon in sympathetic anger sent a flood-tide upon the land and a ketos as well. The oracle of Ammon :prophesied an end to the trouble if Kassiopeia's daughter Andromeda were served up to the Ketos as a meal, so Kepheus, pushed to it by the Aithiopians, tied his daughter out on a rock. When :Perseus saw her it was love at first sight, and he promised to kill the ketos and rescue the girl in return for her hand. Oaths were sworn, after which Perseus faced and slew the ketos, and set :Andromeda free. - Apollodorous, The Library 2.43

This constellation has been known since antiquity. In Mesopotamia, it was identified with the primordial cosmic female principle, the sea-monster Tiamat.