The creature was named after the lake where it is supposed to live. Other names include Champy (New York), Champtany, Tany (baby in Button Bay State Park), Champtanystopheus, Le Chaosaraou (Quebec).

The creature is described as having a long neck, dark green or brown snake-like body, a long tail, with a vertical range of motion and has a point to it. The creature ranges from 15 to 50 feet long, most commonly about 30 feet.

Lake Champlain is a 125-mile (201 km)-long body of fresh water that is shared by New York and Vermont and just a few miles into Quebec, Canada. The 109-mile-long Lake Champlain is also similar to Loch Ness in that both are deep, freshwater lakes that were created some 10,000 years ago. Stretching 109 miles in length and up to 11 miles in width, the lake boasts impressive depths to 400 feet and a water area of 440 square miles. While not as deep as Loch Ness, Lake Champlain is still quite impressive as a potential monster hiding place. Also, both bodies of water support enough fish to feed a small group of lake monsters. 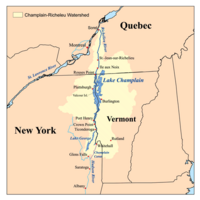 The first European account of a creature in Lake Champlain was supposedly made in 1609 by French explorer Samuel de Champlain — the founder of Québec and the lake's namesake — who spotted the creature as he was fighting the Iroquois on the bank of the lake. However, in actuality no such sighting was recorded, and it has since been traced back to a 1970 article.

Long before that, however, two Native American tribes, the Iroquois and the Abenaki, are alleged to have talked of such a creature and celebrated its existence. The Abenaki gave it the name "Tatoskok."

In 1819 in Port Henry, NY, a railroad crew reported to have spotted a “head of an enormous serpent sticking out of the water and approaching them from the opposite shore.” Around the time of this sighting, farmers nearby claimed to have missing livestock, with drag marks leading to the shore.

In 1870, a full steamboat spotted Champ near Charlotte, Vermont. In 1871, riders of the steamship Curlew claimed to see a head and long neck that created quite a wake near Horseshoe Bay. There was also an an early Champ sighting near Dresden, New York, reported in the New York Times in 1873. Witnesses reported that the animal had bright, silver-like scales that glistened in the sun. The article said, "The appearance of his head was round and flat, with a hood spreading out from the lower part of it like a rubber cap often worn by mariners." In August of that same year, a small steamship loaded with tourists, allegedly struck the creature and nearly turned over. According to newspaper accounts, the head and neck of the animal were sighted afterward about a 100 feet from the ship.

The next important sighting came in 1883 when Sheriff Nathan H. Mooney claimed that he had seen a “…gigantic water serpent about 50 yards away” from where he was on the shore. He claimed that he was so close that he could see “round white spots inside its mouth” and that “the creature appeared to be about 25 to 30 feet in length”. Mooney’s sighting led to many eyewitnesses coming forward with their own accounts of Champ sightings. Mooney’s story predated the public Loch Ness controversy by 50 years.

Champ became so popular that the late P. T. Barnum, in the early 19th century, put a reward of $50,000 up for a carcass of Champ. Barnum wanted the carcass of Champ so that he could include it in his epic World’s Fair Show.

In 1945, the creature was spotted by the famous S.S. Ticonderoga.

In 1970 the creature was reported spotted by two independent witnesses traveling on a ferry across the lake. Richard Spear, one witness, said the animal was "dark brownish-olive" in color with "the size and shape of a barrel in cross-section." The other witness said the creature appeared to be "a large snakelike creature, swimming with its head above water, held as snakes do, with coils behind."

The best picture of Champ is the Mansi photograph, taken in the summer of 1977, that appeared to show a plesiosaur-like body and neck sticking out of the lake. Sandra Mansi and her fiancé Anthony were vacationing on the shores of Lake Champlain when they saw a great head and neck break the surface of the lake. Sandra quickly grabbed her Kodak Instamatic and snapped a shot. The photograph has been examined by experts who claim that it has not been altered in any way. The photograph was in the New York Times and Time Magazine among others. Dr. Paul H. LeBlond, best known for his work with the unknown sea creature called Caddy or Cadborosaurus, performed an analysis of the creature in the Mansi photograph. Using wave size estimates from a mariner's standard practice of the Beaufort scale he was able to estimate the lower and upper range of size associated with the image, which tie in with Sandra Mansi's account of the size. LeBlond's estimated size was 4.8 m to 17.2 m, which ties close to Mansi's estimate of 15 to 20 feet (4.6 - 6.1 m).

Joseph W. Zarzynski, founder of the Lake Champlain Phenomena Investigation and Jim Kennard of Rochester Engineering Laboratories have used high-tech sonar to search for Champ, and on June 3, 1979, they took readings indicating the presence of a 10 to 15 foot long moving object in the waters beneath them.

In 1984, 86 passengers aboard the Ethan Allen, off Apple tree Point, Vermont, spotted 3 to 5 “humps” which disappeared after about 3 minutes due to the approach of a speed boat.

Champ reportedly can be seen in a video taken by fishermen Dick Affolter and his stepson Pete Bodette in the summer of 2005. In the video, something appears under the water near the fisherman's boat and some Champ defenders are calling it the best proof that the monster exists. Close examination of the images may be interpreted either as a head and neck of a plesiosaur-like animal and even an open mouth in one frame and a closed mouth in another; or as a fish or eel (see top link for frames). Although two retired FBI forensic image analysts, who reviewed the tape, said it appears authentic and unmanipulated, one of them added that "there's no place in there that I can actually see an animal or any other object on the surface."

One piece of evidence, though not a "sighting" per se, is the recording of echolocation from within the lake by the Fauna Communications Research Institute in 2003, working as part of a Discovery Channel program. The group has concluded that the sounds they have recorded are similar to that of a Beluga Whale or perhaps an Orca, but not of a known animal, and no dolphin or whale species have been previously known to live in the lake. Study of the Mansi Photo in this context has led to speculation that rather than a neck and head, the photo shows a flipper of some large animal in the act of rolling.

The legend of the monster is considered a big attraction for tourism in the Burlington, Vermont area. For example, the village of Port Henry, New York, has erected a giant model of Champ and holds "Champ Day" on the first Saturday of every August. In April 20, 1982, the Vermont House of Representatives passed Resolution H.R. 19 protecting Champ “from any willful act resulting in death, injury or harassment.” The same year, the New York State Assembly passed a similar resolution.

One theory suggests that Champ is a dinosaur, that managed to escape extinction and lives on in Lake Champlain. A possible candidate is the plesiosaur, a prehistoric water dwelling reptile with a long snakelike head and four large flippers. Scientists date the plesiosaur to the Triassic period, 200 million years ago, through the Cretaceous period, about 65 million years ago (when all dinosaurs are thought to have gone extinct).

Cryptozoologist Roy Mackal visited the lake in 1981 and suggested the creature might be a surviving zeuglodon (also known as a Basilosaurus). Thiis a primitive form of whale which had a long snakelike body that would match the description of many of the reports, but not the Mansi photograph. The fossils of such a creature, thought long extinct, were discovered near Charlotte, Vermont, just a few miles from the lake.

Champ might also be a Lake Sturgeon. There are sturgeon in Lake Champlain and they can grow to great lengths. They are a very old, almost prehistoric fish with a scale-less body that is supported by a partially cartilaginous skeleton along with rows of scutes. Its single dorsal fin, running along its spine, would match many descriptions of Champ, although its sharp, shark-like tail would not.

A recent sound recording, said to be of Champ, consists of numerous echolocation clicks, suggesting that the alleged cryptid may be a new kind of freshwater whale or dolphin. Other Champ suspects include wind slicks, boat wakes, driftwood, long-necked birds, and many other possibilities.