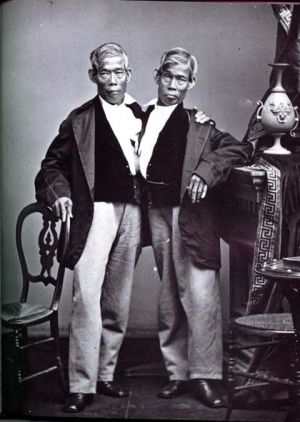 Chang Bunker and Eng Bunker (May 11, 1811 – January 17, 1874) were conjoined twin brothers whose condition and birthplace became the basis for the term Siamese twins.

Chang and Eng were joined at the sternum by a small piece of cartilage. Their livers were fused but were each independently complete. Through practice they were able to stretch the tissue that connected them and stand side-by-side rather than facing one another. This gave the illusion that they were joined at the side, and even today conjoined twins are frequently depicted as joined side-by-side by a sliver of tissue. Separation of Chang and Eng would have been extremely easy, even with 19th century medical technology.

The Bunker brothers were born on May 11, 1811 in Siam (now Thailand), in the province of Samutsongkram. At age 17, the boys were brought back to America by the showman Abel Coffin, whose associate had initially discovered them in 1824 while they were swimming. Upon termination of their contract with their discoverer, they successfully went into business for themselves. In 1839, while visiting Wilkesboro, North Carolina, the twins were attracted to the area and settled on a 110-acre (0.45 km2) farm in nearby Traphill, becoming naturalized United States citizens.

Determined to start living a normal life as much as possible, the brothers settled on a plantation, bought slaves, and adopted the name "Bunker". On April 13, 1843, they married two sisters: Chang to Adelaide Yates and Eng to Sarah Anne Yates. This made their respective children double first cousins. In addition, because Chang and Eng were identical twins, their children were genetically equivalent to half-siblings, thus making them genetically related in the same manner as half-siblings who are also first cousins.

Chang and his wife had 10 children; Eng and his wife had 11. In time, the wives squabbled and eventually two separate households were set up just west of Mount Airy, North Carolina in the community of White Plains – the twins would alternate spending three days at each home. During the American Civil War Chang's son Christopher and Eng's son Stephen both fought for the Confederacy. Chang and Eng lost part of their property as a result of the war, and were very bitter in their denunciation of the government in consequence.

In 1850, they returned to the stage with the great P. T. Barnum for a period of 5 years. There had been some animosity between Barnum and the Bunkers due to the fact that for several years Barnum had been displaying wax replicas of the twins in his museum. Still, the union must have been very successful as they joined up with Barnum a few more times including a European tour.

In 1870, Chang, the stronger and more stubborn of the twins and a heavy drinker, was partial paralyzed by a stroke. Chang actually controlled the legs, thus the mobility for both twins was limited. In 1874 he contracted pneumonia, which was worsened by the carriage trip in the rain between the two farms. He died rather suddenly during the night of January 17. Eng awoke to find his brother dead, and called for his wife and children to attend to him. A doctor was summoned to perform an emergency separation, but Eng refused to be separated from his dead brother. He died three hours later. Chang's widow died on April 29, 1892 and Eng's widow died on May 21, 1917. Chang and Eng Bunker fathered a total of 21 children and their descendants, including several sets of non-conjoined twins, now number more than 1,500. Many of their descendants continue to reside in the vicinity of Mt. Airy and descendants of both brothers continue to hold joint reunions. Two hundred descendents reunited in Mount Airy in July 2011 for the two hundredth birthday of the twins, which was the twenty-second annual reunion.