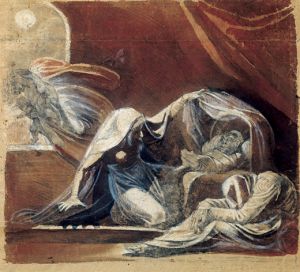 In European folklore and, a changeling is the offspring of a fairy, troll, elf or other legendary creature that has been secretly left in exchange for a human child. The motivation for this conduct stems from the desire to have a human servant (domestic), the love of a human child, or from malice. Some people believed that trolls would take unbaptized children.

An imbecilic or deformed offspring of dwarves, elves, or faeries. It is often hollow and covered with leathery skin.

According to some legends, it is possible to detect changelings, as they are much wiser than human children and grow at a faster rate. When changelings are detected in time, their parents have to take them back.

The return of the original child "may be effected by making the changeling laugh or by torturing it; this latter belief was responsible for numerous cases of actual child abuse".

The changeling was also converted into the stock of a tree by saying a powerful rhyme over him, or by sticking him with a knife. He could be driven away by running at him with a red-hot ploughshare; by getting between him and the bed and threatening him with a drawn sword; by leaving him out on the hillside, and paying no attention to his shrieking and screaming; by putting him sitting on a gridiron, or in a creel, with a fire below; by sprinkling him well out of the maistir tub; or by dropping him into the river.

The reality behind many changeling legends was often the birth of deformed or retarded children. Most often, it was thought, that it was the faeries who exchanged the children, and simple charms, such as an inversed coat, were thought to ward off these beings.

It has been hypothesized that the changeling legend may have developed, or at least been used to, explain the peculiarities of children who did not develop normally, probably including all sorts of developmental delays and abnormalities. In particular, it has been suggested that children with autism would be likely to be labeled as changelings or elf-children due to their strange, sometimes inexplicable behavior.

Some high-functioning autistic adults have come to identify with changelings (or other replacements, such as aliens) for this reason and their own feeling of being in a world where they don’t belong and of practically not being the same species as the "normal" people around them.

Infants diagnosed with "Failure to Thrive" that have no history of neglect also fit the description of changelings. This can be a devastating diagnosis, and it is easy to see how people would have taken comfort in placing the cause outside their influence. The stories of kindness and care being rewarded with the return of the child also fit the nursing needed to restore an infant's health.

Since most beings from Scandinavian mythology are said to be afraid of steel, Scandinavian parents often placed a steel item such as a pair of scissors or a knife on top of an unbaptized infant's cradle. It was believed that, if a human child was taken in spite of such measures, the parents could force the return of the child by treating the changeling cruelly, using methods such as whipping or even inserting it in a heated oven. In at least one case, a woman was taken to court for having killed her child in an oven.

In one Swedish changeling tale (Bortbytingen), the troll child grows up at a farm while the human child grows up among the trolls. Everyone advises the human mother to brutalize the changeling so that the trolls would change children once more. However, the woman refuses to treat the innocent but maladapted troll child cruelly and persists in treating it as if it was her own. In the end, her husband tries to burn the young troll, but the woman rescues it, so the man takes him on a walk to kill it in the forest. Somehow, he regrets his decision and saves the life of the troll. Suddenly, his own son returns and tells his father that his kindness broke the spell and liberated him. Every time someone tried to be cruel to the troll, his troll mother was about to treat the human child in the same manner.

In another Swedish fairy tale (Bortbytingarna) (which is depicted by the image), a princess is kidnapped by trolls and replaced with their own offspring against the wishes of the troll mother. The changelings grow up with their new parents and both become beautiful young females, but they find it hard to adapt. The human girl is disgusted by her future bridegroom, a troll, whereas the troll girl is bored by her life and by her dull human future groom. By coincidence, they both go astray in the forest, upset with the conditions of their lives, and happen to pass each other without noticing it. The princess comes to the castle whereupon the queen immediately recognizes her, and the troll girl finds a troll woman who is cursing loudly as she works. The troll girl bursts out that the troll woman is much more fun than any other person she has ever seen, and her mother happily sees that her true daughter has returned. Both the human girl and the troll girl marry happily the very same day.

In Wales the changeling child (plentyn newid) also known as crimbil initially resembles the human it substitutes, but gradually grows uglier in appearance and behaviour: ill-featured, malformed, ill-tempered, given to screaming and biting. It may be of less than usual intelligence, but again is identified by its more than childlike wisdom and cunning.

The common means employed to identify a changeling is to cook a family meal in an eggshell. The child will exclaim, "I have seen the acorn before the oak, but I never saw the likes of this," and vanish, only to be replaced by the original human child. Alternatively, or following this identification, it is necessary to mistreat the child by placing it in a hot oven, by holding it in a shovel over a hot fire, or by bathing it in a solution of foxglove.

In one tale of the Brothers Grimm, there's an account of how a woman, who suspected that her child had been exchanged, started to brew beer in the hull of an acorn. The changeling uttered: "now I am as old as an oak in the woods but I have never seen beer being brewed in an acorn", then disappeared.

In parts of Ireland, left handed people are sometimes thought to be changeling.