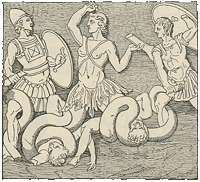 In Greek mythology, Charybdis, or Kharybdis ("sucker down", Greek Χάρυβδις), is a sea monster, daughter of Poseidon and Gaia, who swallows huge amounts of water three times a day and then belches them back out again. She takes form as a whirlpool and devours anything within range. She lies on one side of a narrow channel of water.

On the other side of the strait was Scylla, another sea-monster. The two sides of the strait are within an arrow's range of each other, so close that sailors attempting to avoid Charybdis will pass too close to Scylla and vice versa. The phrase between Scylla and Charybdis has come to mean being in a state where one is between two dangers and moving away from one will cause you to be in danger of the other. Between Scylla and Charybdis is the origin of the phrase "between the rock and the whirlpool" (the rock upon which Scylla dwelt and the whirlpool of Charybdis) and may be the genesis of the phrase "between a rock and a hard place". 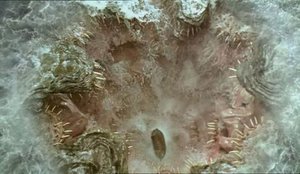 Charybdis as portrayed in The Odyssey (1997) TV miniseries; Odysseus's ship can be seen falling into its maw.

The Argonauts were able to avoid both dangers because they were guided by Thetis, one of the Nereids. Odysseus was not so fortunate; he chose to risk Scylla at the cost of some of his crew rather than lose the whole ship to Charybdis. (Homer's Odyssey, Book XII).

Traditionally, the location of Charybdis has been associated with the Strait of Messina off the coast of Sicily, opposite the rock called Scylla. The whirlpool there is caused by the meeting of currents, but is seldom dangerous. Recently scholars have looked again at the location and suggested this association was a misidentification and that a more likely origin for the story could be found close by Cape Skilla in north west Greece.

Charybdis was originally a sea-nymph who flooded land to enlarge her father's underwater kingdom, until Zeus turned her into a monster.