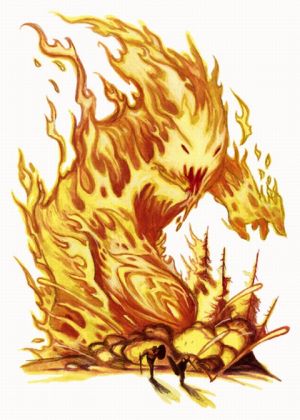 The Cherufe is a gigantic, anthropophagous creature in the Mapuche mythology; of the South American culture, in Chile.

The Cherufe has an humanoid form of rock and magma. It is said that Cherufe inhabit the magma pools found deep within Chilean volcanoes and are the source of earthquakes and volcanic eruptions. Cherufe are also said to be the source of magicians ardent stones (meteorites and volcanic stones) that cause damage in volcanic regions.

The only way abate the Cherufe's appetite for destruction was to satiate the beast's taste for human flesh by throwing a sacrificial victim into the bowels of its volcanic home. Much like the European dragon, the Cherufe's preferred delicacy came in the form of virginal maidens.

Legend has it that once the Cherufe was finished consuming the more delicate portions of its victims, it would delight in a macabre game in which it would ignite the disembodied heads of the young girls who were sacrificed to it, and hurtle them from the mouth of its volcanic home.

According to South American Mythology, the Cherufe was immobilized by the daughters of the sun god, who utilized magical swords, which were capable of freezing the creature.

In Cryptozoology, the Cherufe is described as a large reptilian humanoid creature or dragon. Cryptozoological investigators also consider the possibility that the legends of the Cherufe maybe be based, albeit loosely, on sightings of an actual biological entity, which would have to be capable not only of surviving, but flourishing, in the incredible heat of molten rock. This might be similar to animals who thrive in the tremendous heat found in the mineral rich exhaust of hydrothermal vents on the ocean floor.

The Cherufe appeared in the episode "Twelve Thousand Degrees Fahrenheit" of The Secret Saturdays, a Cartoon Network series about cryptids. A variation of the Cherufe called the Red Cherufe appears in The New Brighton Archeological Society graphic novel.