In popular Chinese mythology, Chiang-shih (or kiang-shi, but also known as jiangshi), sometimes called hopping corpse or Chinese vampires by Westerners, are reanimated corpses that hop around, killing living creatures to absorb quintessence (life force energy) (qì) from their victims. 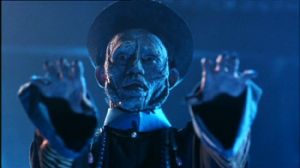 Some would appear to look as a normal human being while others had a hideous green phosphorescent glow with serrated teeth and long talons. They have difficulty walking because of the pain and stiffness of being dead so they hop instead. They are far more pale and have very dark circles under their eyes.

Generally in the movies the hopping corpses are dressed in imperial Qing Dynasty clothes, their arms permanently outstretched due to rigor mortis. Like those depicted in Western movies, they tend to appear with an outrageously long tongue and long fingernails. Their visual depiction as horrific Qing Dynasty officials reflects a common stereotype among the Han Chinese of the foreign Manchu people, who founded the much-despised dynasty, as bloodthirsty creatures with little regard for humanity.

Chiang-shihs were nocturnal creatures and had difficulties crossing running water. It was said that they were particularly vicious and ripped the head or limbs off their victims. They were also said to have a strong sexual drive which led them to attack and rape women. After a period of growing stronger, chiang-shihs would gain the ability to fly, grow long white hair, and possibly change into wolves.

They can be evaded by holding one's breath, as they are blind and track living creatures by detecting their breathing. People also protected themselves from chiang-shih by using garlic or salt. They were driven away with loud noises, and it was thought that thunder could kill them. Brooms were used to sweep the creature back to its resting spot, while iron filings, rice, and red peas were used as barriers. If a chiang-shih reached its flying, white-haired stage, it could only be killed by a bullet or thunder. Its body must then be cremated.

Usually villages that are 'infested' with vampire occurances recruit a Taoist priest to perform a 'ceremony' to exorcise the negative energy. Taoist Priests traditionally rely on talismans-yellow paper strips with illegible characters written in red ink or blood. It is commonly believed that with incantations the priest can 'activate' the talisman, which can totally inhibit a vampire's actions when applied to it's forehead area, thus putting the vampire under a spell. The priest will then, after subduing the vampire(s), use a special bell, which with every ring, will command the vampires to take a single jump. Should the vampire be too strong to subdue, the priest usually draws upon a wooden sword, or a sword made entirely of copper coins linked by a red string as a weapon. Although Taoist priests nowadays do not go 'capturing' vampires, they still perform ceremonies of exorcism from "unclean spirits" and still commonly use talismans.

It is also conventional wisdom of feng shui in Chinese architecture that a threshold, a piece of wood approximately six inches high, be installed along the width of the door to prevent a hopping corpse from entering the household

They are said to be created when a person's soul fails to leave the deceased's body. Usually chiang-shih were created after a particularly violent death, such as a suicide, hanging, drowning, or smothering. It could also be a result of an improper burial, as it was thought that the dead would become restless if their burial was postponed after their death. The chiang-shih were not known to rise from the grave, so their transformation had to take place prior to burial.

The influence of Western vampire stories brought the blood-sucking aspect to the Chinese myth in modern times (the traditional Chiang-shih steal the breath of his victim). In fact, Dracula is translated to Chinese as "blood-sucking jiāngshī" where the thirst of blood is explicitly emphasized because it is not a traditional trait of a jiāngshī.

The wife of teacher named Liu wakes in the morning and finds that her husband who had been sleeping next to her is dead - his head is missing and the bed is drenched in blood. She reports this to the local authorities who then accuse her of murder and put her in jail. She remained there for months. The mystery was finally solved as the result one of the villagers finding a neglected grave on a hillside. A coffin was laid bare next to it with the lid slightly raised.
This villager summoned the rest of the community. When the coffin lid was raised, the corpse was found within resembling the dead person when he was still alive except that it was covered with white hair. Between its arms, it held the head of Liu. The head of Liu could not be pulled from the arms of the corpse. After they cut off the corpse's arms, fresh blood gushed from them and their stumps. But their was not a drop of blood to be found in Liu's head. It had been sucked dry by the vampire. This tale can be found in Supernatural Tales from Around the World edited by Terri Harden (Barnes and Noble, 1995) as an excerpt from Religious Systems of China, vol. 5, book 2, by Jan de Groot (E.J. Brill, 1907.). It also can be found in The Vampire: His Kith and Kim by Montague Summers.

In another tale, a man walking down a country road at night finds an open coffin in the middle of the road. He realized that it must be the coffin of a chiang-shih. He filled the coffin with rocks and broken pottery. Then he retreated to the loft of a nearby barn to observe the coffin and see what would happen there next. About an hour after midnight, the corpse tried to climb back into the coffin. Finding the coffin filled with rocks and debris, the corpse became angry and its eyes began to blaze. In the moonlight, this chiang-shih saw the traveler in the loft and went to the barn. The man feared that he was trapped in the loft and jumped out the window into a tree. But the chiang-shih could not climb the ladder to the loft and went outside where it spotted the man after he climbed down from the tree. The chiang-shih pursued the man. The man finally escaped by jumping into a stream and swimming to the other shore. The chiang-shih could not cross running water. The chiang-shih stood near the stream screaming and gesticulating in anger. Then it jumped into the air three times, turned into a wolf, and ran off. This tale is given in Lust for Blood by Olga Hoyt (Scarborough House, 1984).

According to one tale, in 1761 A.D., the twenty sixth year of the Kien-lung period, there was a time of drought in Peking and its vicinity. During this time, a courier was dispatched with an urgent message from one general to another in a different city. On the way, while he was in a lonely place, a storm suddenly brewed up and the rain poured heavily upon him. The courier took shelter in the pavilion of a post house. Here a lovely young woman joined him. She invited him to her house. The courier followed her, tied his horse to a post outside her house, and went inside. The woman treated him first with tea. They spent the night together enjoying each others embraces in bed. But when cock crowed the woman suddenly got out of bed , put on her clothes, and left. The exhausted courier fell asleep. When he awoke again, he found himself on a tomb stone in the open pain. There were no buildings nearby. He found his horse tied to a tree.
Frightened, he quickly untied his horse, mounted it, and road off. When he reached his destination, he was many hours late. Under interrogation, he told what had happened to him on the way. The general had the tomb investigated. It turned out to that of a young unmarried woman who had hung herself out of shame after it was discovered that she was no longer a virgin. Her specter had enticed and seduced travelers coming through the vicinity of her tomb. And it was suspected that her specter was the cause of the drought. The general ordered the tomb opened. There, inside, rested the woman’s corpse still undecayed, plump and rosy in complexion, but covered with white hair. This corpse was then cremated. The drought ended the next day and the tomb was no longer haunted. From Supernatural Tales from Around the World.

In Chinese belief, each person has two souls, a superior or rational soul and an inferior irrational soul. The superior soul could leave a sleeping body and appear as the body's double as it roamed about. It could also possess and speak through the body of another. However, if something would happen to the disembodied soul during its journey, its body would suffer.

The inferior soul, on the other hand, was called p'ai or p'o and was that which inhabited the body of a fetus during pregnancy and often lingered in the bodies of the dead. It was thought to preserve the corpse. If the p'ai was strong enough, it could preserve and inhabit a corpse for a length of time, using the body to serve its needs.

The chiang-shih would arise from people who died a violent death, including suicide. Improper burial procedures such as a long postponement of burial which angered the dead. Animals, particularly cats, were kept away from the unburied corpse for fear that the might jump over it and thus the deceased would come back as a chiang-shih. Because they had no powers to dematerialize, transformation had to occur before burial, an added incentive for prompt burial.

It came from the mythical folklore practice of "Traveling a Corpse over a Thousand Li", where traveling companion or family members who could not afford wagons or have very little money would hire Tao priests to transport corpses of their friends/family members who died far away from home over long distances by teaching them to hop on their own feet back to their hometown for proper burial. Some people speculate that hopping corpses were originally smugglers in disguise who wanted to scare off law enforcement officers.

Hopping Corpses were a popular subject in Hong Kong movies during the 1980s; some movies even featured both Chinese Hopping Corpses and "Western" zombies.