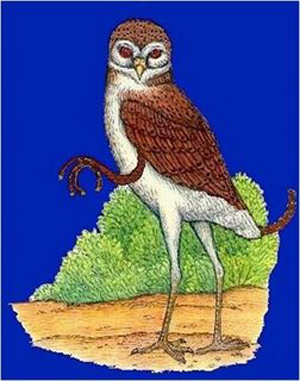 The Chickcharney or chickcharnie is a fabulous creature that lives in the forests of Andros Island in the Bahama Islands.

Chickcharnies are supposed to be forest-dwelling elfin creatures resembling birds, furry or feathered and rather ugly looking. Their nesting sites are constructed by joining the tops of two pine trees. Their piercing eyes are red. They have three fingers, three toes and a tail, which they use to suspend themselves from the trees.

In common legend, if a traveler meets a chickcharney and treats it well, he/she will be rewarded with good luck. But, treating a chickcharney badly will result in bad luck and hard times. Sometimes resulting in having the witness' head turnt on backwards forcibly and completely.

The Chickcharnee is said to live in the tops of the tallest pine trees on Andros. Andros is called La Isla del Espiritu Santo or the island of the Holy Spirit. It is also a home for the legendary Lusca

It is believed that the origin of the chickcharnie idea was the large, three-toed, burrowing owl which once lived in these forests, but became extinct in the 16th century.

The Legend Of The Chick Charney

Like the Irish Leprechaun,
The chick Charney is our sprite.
He brings good luck to man & woman;
sleep in silk cotton tree come night.

Some say Chick Charney save de slaves,
Some say he jus a guess,
Some claim he live in Andros,
Das why he take no mess!

Chick Charney like tiny bird,
He gat dem great big eyes.
Sometimes he make some mischief-
Depends on what he spy!

So be careful! Watch your back!
An don cha do no wrong,
Cause when Chick Charney ready,
He sure could do you harm!